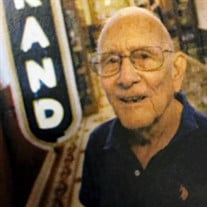 Wendell Hobdy Bryan, 97, died on Wednesday, July 22, 2020, at his home in Amory. In March of this year, he was living alone, driving his own car, attending church, and making daily trips to drink coffee with friends, but eventually old age caught up with him. Hobdy was born on September 9, 1922, in Hamilton, Alabama, the younger of two sons of John Luther Bryan and Era Mae Masters Bryan. In 1926, when his older brother, John Luther Bryan, Jr., developed apendicitis, Hobdy's father took John to the hospital in Amory where John was treated by Dr. M.Q. Ewing. During that visit, Dr. Ewing persuaded the elder Mr. Bryan that Amory needed a laundry -- and that the hospital, in particular, needed a laundry. So the family moved to Amory, and Hobdy's father opened the Amory Steam Laundry. Hobdy lived in Amory until his death more than 90 years later. Throughout his life he was a faithful member of the First Methodist Church, and he remembered worshiping in the old sanctuary before it was destroyed by fire. The laundry operated a large number of trucks, and, as was the practice at the time, Hobdy learned to drive at a young age so that he could help out. While teaching him to drive, his mother had him drive across the one-lane bridge over the Tombigbee River near Cotton Gin Port. In later years he said he thought he was the only person alive to have driven across the bridge. In the late 1930s, he met a girl who had just moved town from Becker, Nadine Morgan, the daughter of Lucian Boggan Morgan and Maudie Mae Walden Morgan. She and Hobdy were married on September 6, 1941. Both of them finished in the remarkable class of 1939 at Amory High School. Hobdy was the last surviving member of the class. After high school, Hobdy enrolled at what was then Mississippi State College. While there, a ROTC instructor insisted he answer to the name "Brown" which he refused to do. He obtained a doctor's excuse to be exempt from ROTC. Later, he had a disagreement with a professor who insisted that multiplying two negative numbers produced another negative number. He did not graduate. . After Pearl Harbor, he joined the U.S. Navy and was stationed for a while in Long Beach, California, where Nadine joined him, and later on Bora Bora in the South Pacific. After Hobdy returned to Amory, he and his father operated the Northeast Mississippi Fertilizer Company. The Mississippian Railway delivered to them boxcars of materials which they mixed and packaged into 50- 80- and 100- pound bags. He served on the board of trustees for the Amory Separate School District throughout the 1960s during the time school segregation ended. The board determined they would always comply with the regulations of the United States Department of Health, Education, and Welfare, and they did. The Amory public schools first operated a racially unified school district at the beginning of the 1969-1970 school year. A high school senior that year was his only child, Wendell Hobdy Bryan II, who was born on December 5, 1952, and who is a state senator. Also in the 1960s, he was employed by the City of Amory as director of Urban Renewal and later he was zoning administrator. He worked to pass a bond issue which, among other things, built the two community centers in Amory. During the construction of the Tennessee-Tombigbee Waterway, Hobdy was instrumental in working with the U.S. Army Corps of Engineers to develop the industrial park which now abuts the waterway. The area had been designated as a disposal area. He arranged for the city to purchase certain land where the waterway would be located and then to swap land with the corps so that the city wound up owning the industrial site. The former disposal site had become a level industrial site bordering the waterway. His wife, Sarah Nadine Morgan, died in 1973. In 1975 he married Eva Morris Duncan, a native of Hinkle Creek in Alcorn County, and the widow of Dr. Owen Duncan. With the marriage came a new set of kinfolk, who he enjoyed getting to know, and a connection to former residents of Hinkle Creek, who he seemed to encounter everywhere. Eva died in 1996. In later years, Hobdy was a member of the board of the Amory Regional Museum, where he volunteered for countless hours. He remained active in the First United Methodist Church, being particularly supportive of the Glove ministry, which provides food and other assistance to those in need. He was buried in the Masonic Cemetery in Amory. Because of the pandemic, no funeral was held, but a memorial service will be held at the First United Methodist Church of Amory whenever it becomes safe to do so. As a child, Hobdy was intrigued with the year 2000, and hoped that he would live to see the new century. He did.

Wendell Hobdy Bryan, 97, died on Wednesday, July 22, 2020, at his home in Amory. In March of this year, he was living alone, driving his own car, attending church, and making daily trips to drink coffee with friends, but eventually old age... View Obituary & Service Information

The family of Wendell "Hobdy" Bryan created this Life Tributes page to make it easy to share your memories.

Send flowers to the Bryan family.