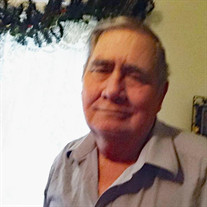 Amory – Cecil Truman Johnson, 72, passed away at his residence on December 27, 2019. Born on April 26, 1947, he was the son of the late Cecil F. Johnson and Mauvelean Lyles Johnson. Truman attended Smithville Schools. He then entered into the Armed Forces, serving in the US Navy where he initially was deployed to serve in Vietnam from 1965 until 1967. He then served the rest of his time in the Phillipines until receiving Honorable Discharge in August of 1969. He married the love of his life, Maddie Monaghan Johnson, on November 20, 1969 and they were happily married for 50 years and one month. They were blessed by God with two children. Truman was a true family man who believed in God and serving Country. He was devoted to his family and loved to the fullest. In his free time, he liked to go hunting and fishing with good company. Truman will be missed dearly by all that knew and loved him yet they know he is celebrating his new life with Jesus. He is survived by his wife, Maddie, Amory; daughter, Vicky Renee Johnson, Amory; son, Truman Scott Johnson (Beth), Becker; 3 grandchildren, Dylan Scott Johnson, Amory, Brayden Thomas Johnson, Becker and Maddie Elizabeth Johnson, Becker; sisters, Ruby Faye Sorrells (Billy), Sara Nell Johnson (David), Nettleton; brothers, A.D. Johnson, Amory, Bobby Johnson (Pam), Mooreville; a host of nieces and nephews. Truman was preceded in death by his parents, Cecil and Mauvelean Johnson; brother, Tommy Johnson. A funeral service will be held on Tuesday, December 31, 2019 at 11:00 am at E. E. Pickle Funeral Home in Amory with Bro. Bill Monaghan, Bro. Scott Johnson and Bro. Andy Russell officiating. Burial will follow in New Chapel Cemetery, Itatwamba County, MS. Visitation will be on Tuesday, December 31, 2019 from 9:30 am until 11:00 AM, at the funeral home in Amory. Memories and condolences may be shared with his family at eepicklefuneralhome.com.

Amory &#8211; Cecil Truman Johnson, 72, passed away at his residence on December 27, 2019. Born on April 26, 1947, he was the son of the late Cecil F. Johnson and Mauvelean Lyles Johnson. Truman attended Smithville Schools. He then entered... View Obituary & Service Information

The family of Truman Johnson created this Life Tributes page to make it easy to share your memories.

Amory – Cecil Truman Johnson, 72, passed away at his residence...