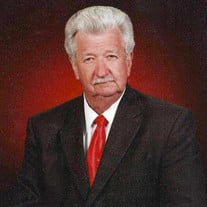 Amory – Truman L. Carter, 84, finished a great work here on earth and began his eternal life on January 6, 2021. Born on March 28, 1936, he was a son to the late Leroy “Buddy” Carter and Ruby Lou Hester Carter. Bro. Truman grew up in Monroe County, attended school at Hatley and Wren Schools and graduated with the Wren High School Class of 1955. With a tall stature he was an excellent basketball player. He furthered his education by attending IJC and shortly thereafter he decided to serve his country. He joined the United States Air Force and served for two years and then signed up to served with the National Guard. Bro. Truman was a patriot and loved his country. The Lord began to tug on his heart and after leaving the service, he answered the call to introducing people to Jesus. He started college at Clark Bible College in Newton, MS and shortly thereafter began his 63 year career of sharing the gospel of Jesus. There was no other career for Bro. Truman, as he truly believed that God did not want him to retire from the greatest job on earth, spreading the Word of God. With a larger than life personality, Bro. Truman would light up a room with his contagious smile and friendly demeanor. The spirit of God could be felt when you were around him and he loved his community and its people. Bro. Truman never met a stranger and one would be hard pressed to meet someone from Monroe County whose life he did not touch in one way or another. Bro. Truman loved his family dearly and his wife was his best friend, with whom he made many great memories. In his free time, he liked to work outside, in the garden and wood working, especially on bird houses. He always shared with others the produce he was blessed with from his vegetable garden. Bro. Truman enjoyed Old Country Music as well as Gospel music. He loved to worship and make a joyful noise, especially singing Bass. Bro. Truman loved Alabama football and was a diehard fan. One of his closest friends was Wayne West and they had many adventures together. Bro. Truman’s presence will be missed dearly by all that knew and loved him. His legacy of hope and salvation, he left behind for so many people in the community is immeasurable. He joyful presence will be missed dearly yet his family and friends celebrate with his home going and reuniting with his sons. Left behind to treasure the memories are wife, Linda Calhoun Carter, Amory; daughters, Debra Carter Kuykendall, Smithville, Rhonda Carter Sloan, Fort Walton Beach, Florida; step-son, Kent Summerford, Amory; step-daughters, Angie C. Wilson, South Carolina, Bridgett C. Watterson, California; grandchildren, Truman L. Carter, III, Melissa K. Beach, J. B. Kuykendall, Joseph A. Kuykendall, Mason H. Carter, Sydney Bryan, Evan Sloan, Tyler Summerford, Dr. Bethany Summerford, Amory Watterson, Sidney Calhoun; many great grandchildren; brother, Jimmy Lynn Carter, daughter-in-law, Sheila Carter; nieces and nephews. In addition to his parents, he was preceded in death by his sons, Truman L. Carter, II, Richard Herndon Carter and granddaughter, Linsay Carter. The family would like to extend a special thanks to Dr. Bill Rogers, Dr. Gerald Parker, and the caring staff of Legacy Hospice, for all the wonderful care he received the past couple of months. A Celebration of Life Service will be held on Sunday, January 10, 2021, at 2:00 pm, at E. E. Pickle Funeral Home with Bro. Mark Thornton and Bro. Scott Carter officiating. Burial will follow in Hatley Cemetery, Hatley with the Pallbearers being Colby Pearson, Brian Schaffer, Wayne West, Patrick Holloway, Eli Carter, and Randy Parker. Visitation for family and friends will be on Saturday from 5:00 pm until 7:00 pm at the funeral home in Amory. Donations in lieu of flowers may be made to Gideons International, P.O. Box 140800, Nashville, TN 37214 or St. Jude’s Children’s Research Hospital, 501 St. Jude Hospital, Memphis, TN. Memories and condolences may be shared with his family at EEPickleFuneralHome.com

The family of Bro. Truman Carter created this Life Tributes page to make it easy to share your memories.

Send flowers to the Carter family.