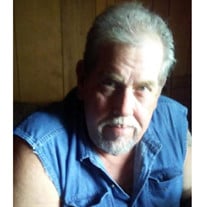 Toney Michael “Big Mike” Reese Amory – Toney Michael “Big Mike” Reese, 67, met his Savior face to face on Friday, April 9, 2021. Born on February 9, 1954, in Amory, he was a son of the late Billy R. Reese and Martha Jean Cox Reese. Mike grew up in Monroe County and graduated from Hatley High School. He served this great country as a Private in the United States Army. He went on and furthered his education, receiving an Associate’s Degree in Criminal Justice from AIU. A man who was not afraid of hard work, Mike was a frame builder at United Furniture in Amory. He believed in the Lord and was a member of New Hope Baptist Church in Hatley. During his lifetime, God blessed him with a son, two grandchildren, and a loving fiancé, Melodi "Dee". They will miss him dearly and he was so much a part of their lives. He had a larger than life presence, was a gentle giant, who was loving and caring, always putting others before himself. His kind heart of gold was always evident in his speech and actions towards others. In his free time, he liked to be outdoors enjoying God’s creations, mostly while camping and fishing. He could make anyone laugh, was real jokester, and when he went bowling, good times were usually had by all around him. He liked to listen to old 70’s country music while relaxing. One of closest friends in life was Jimmy Strawbridge and they were like brothers to each other. Although his presence will be dearly missed by his family and friends, they know that he is with God. The memories they have of him will be treasured forever. Left behind to treasure his memories are his son, Shawn Michael Reese, Amory; fiancé, Dee, Amory; grandchildren, Abbigale Reese and Gabriel Reese; sisters, Gail Reese Earrey (Bill), Amory, Dana Reese Taylor, Red Bay, AL; brother, Mark Wesley Reese (Darlene), Wren; aunt, Brenda Cox Elliott (John B. Denley III), Saltillo; cousin, Chris Elliott (Gayle), Tupelo; lifelong friend, Jimmy Strawbridge (Joy), Dubach, LA; a host of nieces and nephews. He was preceded in death by his parents, Billy and Martha Cox Reese. A graveside funeral service will be held on Tuesday, April 13, 2021 at 2:00 pm at Calvary Baptist Church Cemetery, Becker, MS, with Bro. Rodney Waycaster officiating. Visitation will be held from 1:00 pm until the service hour at Calvary Baptist Church Cemetery in Becker, MS. Donations in lieu of flowers may be made to the Dr. Susan B Love Foundation for breast cancer research, 16133 Ventura Blvd., Suite 1000, Encino, CA, 91436. Memories and condolences may be shared with his family at EEPickleFuneralHome.com.

The family of Toney Michael "Big Mike" Reese created this Life Tributes page to make it easy to share your memories.

Send flowers to the Reese family.