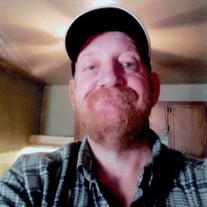 Hamilton— Tommy Spruill, 49, passed away on Sunday, September 30, 2018 at his residence. He was born on September 12, 1969 in Tampa, FL to the late Clarence Milton and Dorothy Patterson Spruill. Tommy attended school at Smithville. He worked in construction all of his life. His love for his family, especially his children and grandchildren, guided him in his every-day life. His children and grandchildren brought him great joy, as did his beloved fiancé, Tammy. In his free time, Tommy liked to fish or grill out with his best friend, Wayne Edwards. Together as kids, they skated in competitive events. Tommy enjoyed anything outdoors. His favorite music to listen to was country; however, his favorite band of all time was KISS. Tommy was also an avid wrestling fan. In addition to watching wrestling, he also enjoyed NASCAR racing and Florida Gators football. Tommy was a great man, a devoted father, and a loving fiancé. His family is in mourning, but they take comfort in the hope that they will be reunited again one day. Tommy is survived by his loving fiancé, Tammy Holt Gray; daughters, Ashley Spruill (Todd Walden), Jennifer Poe (Matthew); sons, Michael Spruill, Andy Spruill; grandchildren, Savannah and Brendan Poe, Kayden Spruill; sisters, Brenda Spruill, Joyce Miller (Danny), Tammy Edwards, Sandy Bell (John), Amanda Barber (Corey); several nieces and nephews; and special cousin and friend, Wayne Edwards. A funeral service will be held at 11AM Thursday, October 4, 2018 at E.E. Pickle Funeral Home. Dr. Lloyd Sweatt will officiate the service. Burial will be at New Hope Methodist Church Cemetery in Okolona. Pallbearers will be Matthew Poe, Todd Walden, Jerry Stanford, Richard Holt, Wayne Edwards, and T.J. Edwards. Visitation will be on Thursday from 9:30 until the service hour at the funeral home. Memories and condolences may be shared with the family at eepicklefuneralhome.com

Hamilton&#8212; Tommy Spruill, 49, passed away on Sunday, September 30, 2018 at his residence. He was born on September 12, 1969 in Tampa, FL to the late Clarence Milton and Dorothy Patterson Spruill. Tommy attended school at Smithville. He... View Obituary & Service Information

The family of Thomas "Tommy" Spruill created this Life Tributes page to make it easy to share your memories.

Send flowers to the Spruill family.