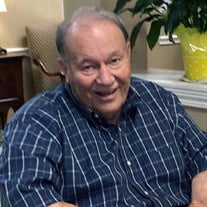 Starkville – Thomas E. “Tom” Stanford, Sr., PhD, 90, passed away on Monday, December 9, 2019 at OCH Regional Medical Center, Starkville, MS. Born in Amory, MS on October 22, 1929, he was a son of the late Estelle Tartt Stanford and Fred Jackson Stanford, Sr. He proudly served in the United States Air Force from 1951 until 1955. He graduated from Amory High School with the class of 1947. Tom received his Bachelor’s Degree and Master’s Degree from MSU. He later obtained a PhD in Education Administration from Ole Miss. He worked many positions during his career in the Public School system including 12 years in the Tupelo School System where he was a Teacher, Coach, Guidance Counselor, and eventually a Principal for Milam Jr. High School. He became a Superintendent for the Iuka School System from 1971-1977 and later he moved to Hayti, Missouri where he was superintendent for over 10 years. A family man, Tom married, Billie Jean McFadden Stanford on June 18, 1952. They were blessed by God with three children. He was of the Baptist faith and his love for Christ and family was the most important to him. Later in life, he attended church services at Indywood in Greenwood. In his free time, he enjoyed fellow shipping with his fellow educators and being involved in the Rotary Club. Tom enjoyed politics. He loved sports, music, mechanics, electronics and cooking in his later years. He was a compassionate supporter of young people’s lives as he made an effort to positively guide them to adulthood. Memories he passed on to his children will never be forgotten. Tom is survived by his son, Tom Stanford, Jr MD (Carolyn), Austin, TX; daughters, Paula Dill (Reggie), Memphis, Laura Stanford Jackson (Jim), Starkville, MS; grandchildren, Justin Dill (Jennie), Paul Dill (Leigh), Claire Stanford Logan, DDS (Jeffrey), Luke Stanford (Brandy), Hays Stanford; Matthew, Michael, Mary Katherine; Jay, Jeff, and John Ross Jackson; 8 great-grandchildren. In addition to his parents, Tom was preceded in death by his loving wife, Billie Jean and his brother, Fred Stanford, Jr. A graveside service will be held on Saturday, December 14, 2019 at 11:30 am at Masonic Cemetery, Amory, MS with Dr. Lloyd Sweatt officiating. Visitation for family and friends will be held on Saturday, December 14, 2019 from 10:00 am until 11:20 am at the funeral home in Amory.

The family of Dr. Thomas "Tom" Stanford Sr. created this Life Tributes page to make it easy to share your memories.

Send flowers to the Stanford family.