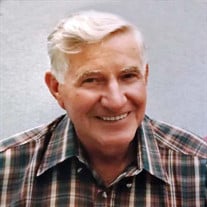 Thomas “Melvin” Noe, 98, passed away at his daughter’s residence on Friday, July 7, 2017. Born on July 9, 1918 in Sulligent, Alabama, he was a son of the late Marvin and Gladys Young Noe. He graduated from Sulligent High school. He married Novis Stanford on December 24, 1941. Melvin enlisted in the U.S. Army during World War II and was a member of the 12th infantry regiment. He fought in Normandy, Ardennes Forest, Central Europe, France and Rhineland. He proudly fought for the freedoms that we have today. He was a former Mason and proud that he was a WW II Veteran. Melvin was of the Methodist faith. He spent his live dedicated to his farm and gardening. He developed lasting friendship with his fellow farmers. When he could, he loved listening to old time Gospel. When asked about his life, Melvin said that if he had to relive his life, he would not change a thing. He was the last of his immediate family. He was a man who loved life, his family, and farming. Melvin is survived by a daughter, Nova Gillespie, Amory; son, Tommy Noe (Marilyn), Smithville; grandchildren, Michelle Welander, Lisa Hanna, T.C. Noe, Jennifer Hanna, Crystal Jones, Ginger Jenkins; several great-grandchildren; and a host of nieces and nephews. In addition to his parents, he was preceded in death by his wife, Novis Stanford Noe; daughter, Rebecca Hanna; his brothers and sisters. Graveside services for Melvin Noe will be at 11AM, on Monday, July 10, 2017 at Wesley Chapel Cemetery, Detroit, Alabama, with Bro. Sammy Washburn officiating. Pallbearers will be T.C., Heath, Kyle, and Austin Noe; Race Roberts; Alan Briggs. Memories and condolences may be shared with his family at EEPickleFuneralHome.com.

The family of Thomas Melvin Noe created this Life Tributes page to make it easy to share your memories.

Thomas “Melvin” Noe, 98, passed away at his daughter’s residence...

Send flowers to the Noe family.