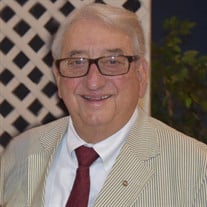 Thomas Griffith Amory – Sidney Thomas Griffith was born in Okolona, MS on February 7, 1940, to Sidney Griffith and Eva Mae Jones Griffith. He went to his heavenly home on January 6, 2021 at the age of 80. He spent his early years in the Wren community and graduated from Amory High School in 1958, after the Wren School was consolidated with the Amory School District. After high school, he attended both Itawamba Junior College and Mississippi State University, earning a degree in Business Administration. He remained in Amory where he met and married Ruth McAllister of New Albany. They were married on September 5, 1964 and had celebrated their 56 year anniversary at the time of his death. They became proud parents of two sons and were blessed with four beautiful granddaughters. He loved his granddaughters dearly and loved watching and being involved in all of their activities. He was a man who truly had a servant’s heart. He lived this out in every aspect of his life. He had a deep love for God, people, and community. He was a member of St. Andrew’s United Methodist Church Amory for 53 years. He treasured the time that he got to spend with his Sunday School class “The Odds and Ends”. During his 53 years of service to St. Andrew’s, he was able to serve in many capacities, including Chairman of the Administrative Board and President of the United Methodist Men. He was a long time member and Paul Harris Fellow of the Amory Rotary Club. He served on the Board of Directors for First Friends in Amory. He was a member of the ICC Board of Trustees, as well as the ICC Alumni Board. Early in his career, he served as Executive Director of the Amory Chamber of Commerce and as Assistant Director of the Community Development Foundation in Tupelo. In 1977, he was honored and humbled when the citizens of Amory elected him mayor. He would go on to serve for 28 years as Amory’s mayor and greatest cheerleader. During his service to the City of Amory, he was honored to serve in leadership positions of many local, regional, state and national organizations. He was named ICC Alumnus of the Year, a member of the Board of Directors of the Three Rivers Planning and Development District, Past President of the Mississippi Municipal League, and he was appointed by the Governor of Mississippi to the TVA Resource Council. He said many times “There is no higher professional honor than being elected Mayor by the citizens of Amory”. After retiring from city government, he was named as Administrator of the Tenn-Tom Waterway Authority. Survivors include his wife of 56 years, Ruth McAllister Griffith, two sons, Tommy (Teresa) and Dan (Laura), both of Amory; four granddaughters, Erin, Sydney, Logann, and Reese Griffith, all of Amory; one brother, Bill Griffith (Donna), of Amory; one niece, Ellie Laporte (Jotham), of Chattanooga,TN; one nephew, John Craig Griffith (Emily), of Tupelo; one great niece, Avery Laporte; one great nephew, Drew Laporte. He was preceded in death by his parents, his brother-in-law, Bill McAllister, and a sister-in-law, Debbie Andrews. His funeral service will be held on Monday, January 11, 2021, at 2:00 pm at St. Andrews United Methodist Church, Amory, MS, with Bro. Coy Hill, Dr. Lloyd Sweatt, and Rev. Brian Gordon officiating. Burial will be in Masonic Cemetery, Amory, MS with pallbearers will be Dr. Jim Monroe, Jimmy Glenn, Rick Gault, Ronnie Bowen Tommy Minich, and Mike Tyree. Honorary Pallbearers will be the City Employees from 1977-2005. Visitation for family and friends will be on Monday from 1:00 pm until 2:00 pm at St. Andrews United Methodist Church, Amory. In lieu of flowers, contributions may be made to the The Thomas Griffith Scholarship Fund at Itawamba Community College Foundation, Inc., 602 West Hill Street, Fulton, MS 38843 or call 662-862-8039. Memories and condolences may be shared with his family at EEPickleFuneralHome.com

Thomas Griffith Amory &#8211; Sidney Thomas Griffith was born in Okolona, MS on February 7, 1940, to Sidney Griffith and Eva Mae Jones Griffith. He went to his heavenly home on January 6, 2021 at the age of 80. He spent his early years in... View Obituary & Service Information

The family of Thomas Griffith created this Life Tributes page to make it easy to share your memories.

Send flowers to the Griffith family.