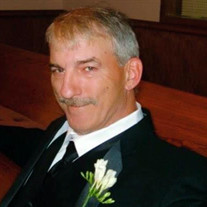 Amory – Terry “Cooter” Van Sullivan, 64, became totally healed and started his new life in Heaven on Friday, January 14, 2022. Cooter was born on October 2, 1957, in Nettleton, MS, to Linda Higginbotham Sullivan Cruber and the late Cedric Kenyon “CK” or “Dub” Sullivan. Cooter grew up in Nettleton, MS and graduated with the Class of 1975. In and out of school, he was very athletic, playing football, baseball, softball, and golf. Cooter furthered his education by attending IJC, USM, and Ole Miss. During his lifetime, he was a hard worker, and great provider for his family. While he was still young he worked his first job doing carpentry work with his Uncle, Pete Sullivan, who taught him all his carpentry skills. Next began a long career at True Temper Sports, where he was employed for over 30 years. During this long span of time, he made many friendships and built some great bonds that would last a life time. He retired after 30 years of work only to go back to work, doing something a little more fun. He worked at The Old Course, which also happened to be one of his favorite places to be. His most important accomplishment of all was that he made a profession of faith and was saved at First Baptist Church in Nettleton. His faith meant the world to him and he loved the Lord. Later in life, he became a member at First Baptist Church in Amory. Through the years, he showed his great selfless servant Christian heart by coaching and teaching children, as well as his own, how to play different sports. Cooter met his future bride at a wedding and he married her, his best friend, Pam Harlow on July 26, 1980. Together, God blessed them with four children and extended family. They were blessed to have such a loving husband and caring father, who was so involved in their lives. He always made sure that his family knew how much they meant to him and he just spoiled his grands or as he called them his “rug-rats”. In his free time, he enjoyed being with his family, attending sporting events, coaching, playing football and golf. He was a rebel through and through and he especially liked attending any Ole Miss Football games. Cooter was competitive at times, being a little hard headed and stubborn when it came to certain situations. He liked the classic rock and roll and was just a good guy. During his lifetime, he was blessed with great friends and a loving family, with whom he liked to just spend time catching up on life. As his health deteriorated later in life, his family were witnesses to his very strong faith in God and his unwavering love for them. There will never be another Cooter and a smile will come to many faces as others reflect on the great memories made through the years. He will be dearly missed by those who knew and loved him. Left behind to treasure the memories are his loving wife, Pam Harlow Sullivan, Amory; daughters, Lesley Sullivan Wright (Austin), Samantha Sullivan; sons, Corey Sullivan and Brad Sullivan (Cassie); his mom, Linda Higginbotham Sullivan Cruber; grandchildren, Aubrey, Brayden, John Mark and Parker; brothers, Randy Sullivan, Scotty Hughes, and Poppy Cruber; father and mother-in-law, Bud and Peggy Harlow; a host of nieces and nephews. He was preceded in death by his dad, Dub Sullivan; his mom, Frances Hughes; his sister, Cindy Sullivan; his brother Mark Sullivan; his Uncle, Ricky Higginbotham; and his nephew, Micah Sullivan. A Celebration of Life Graveside Service will be held at 2:00 pm. on Tuesday, January 18, 2022, at Masonic Cemetery in Amory, MS, with Dr. Allen Simpson and Bro. Dennis Smithey officiating. . Pallbearers will be Richard Schlicht, Bobby Harper, Robbie Gillentine, Walter Archer, Mark West, and Mike Hurley. Honorary Pallbearers will be Dean Mann, Jerry Lewis, Michael Leech, his softball buddies, and his old golfing buddies. Visitation for family and friends will be held on Monday evening, January 17, 2022, from 5-8 pm at E. E. Pickle Funeral Home in Amory. Donations in lieu of flowers may be sent to First Baptist Church, Amory, MS or St. Jude Children’s Hospital, Memphis, TN. Memories and condolences may be shared with his family at epicklefuneralhome.com.

The family of Terry "Cooter" Van Sullivan created this Life Tributes page to make it easy to share your memories.

Send flowers to the Sullivan family.