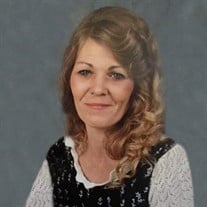 Aberdeen – Teressa Gail Pickens, 59, passed away on Sunday, March 11, 2018, at NMMC, West Point. Born on November 8, 1958, in Amory, she was a daughter of the late Robert and Bernice Due Tomlin. Teressa graduated from Smithville High School with the Class of 1976. She also attended Itawamba Junior College. During her career, she worked as a seamstress at Amory Garment. She also worked at Golden Living and in respiratory therapy with Diversicare. Teressa was of the Mormon faith. Teressa spent much of her time with her family. She loved cooking and was known for her fried apple pies and chocolate pies. She cherished Thanksgiving dinners with family. She had quite the green thumb and enjoyed working in her garden and planting beautiful flowers. Teressa loved to keep her grandchildren and was very active around her community. She was known for her kind heart and her willingness to help anyone in need. In her free time, she enjoyed riding motorcycles and listening to all types of music, especially Van Morrison. Teressa has left a lasting impact on those who knew her, and she leaves a legacy of love and selflessness for her family to always remember. She is survived by a daughter, Laura White Ebert (Dennis Gasper), Smithville; son, Toby White (Kim), Baldwin; sister, Christy Bennett (Chris); grandchildren, Tristen Gasper, Adalyn Ebert; Candace Armstrong; Aleisha Davis; great-grandchildren, Haley and Hunter Carson; John Smith; Breanna Armstrong; Kaylee Owens; and twins, Andrew and Preston Owens; special friends, Sonny Pazucha, Deanna Smith, and many more special friends. In addition to her parents, she was preceded in death by a brother, Richard Tomlin; and her best friend, Cindy Calcote. Her Memorial Service will be at 12 PM, Friday, March 16 at E. E. Pickle Funeral Home with Rocky Loper officiating. Visitation will be from 10 – 11:50 AM, Friday. Memories and condolences may be shared with his family at EEPickleFuneralHome.com.

Aberdeen &#8211; Teressa Gail Pickens, 59, passed away on Sunday, March 11, 2018, at NMMC, West Point. Born on November 8, 1958, in Amory, she was a daughter of the late Robert and Bernice Due Tomlin. Teressa graduated from Smithville High... View Obituary & Service Information

The family of Teressa Tomlin Pickens created this Life Tributes page to make it easy to share your memories.

Send flowers to the Pickens family.