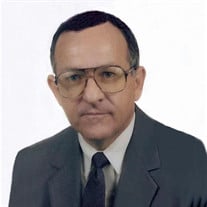 Robert T. “Ted” Jones was called home by his Lord and Savior on Thursday, June 6, 2019. He was born September 18, 1945 in Amory, MS to Jean Lee and Dick Jones. He was educated in the Amory Public Schools and graduated in 1963, after which he entered the University of Mississippi where he graduated with a BBA Degree in Accounting. While at Ole Miss he was a member of Sigma Chi Fraternity. After graduating from Ole Miss he entered the U. S. Army as an officer candidate and graduated as a 2 Lt. in the Corps of Engineers in 1969. He was a Master Instructor at the Engineer School, Ft. Belvoir, VA where he taught Explosives and Demolitions to officers and NCO’s. After he was discharged from the U. S. Army he went to work for the IRS where he remained until his retirement in 2004. With the IRS, he was an Internal Revenue Agent, Group Manager, Large Case Manager and Global Team Manager. He was a Certified Public Accountant. He continued his military career as a member of the U. S. Army Reserves and held various leadership positions until his retirement in 1994 as a LTC. He lived in Houston, TX from 1978 to 2005, retiring to Amory, MS in 2005. While in Houston he was a member of Spring Woods United Methodist Church where he was a founding member of the Wesleyan Sunday School Class, taught Sunday school, and served on various committees. He was active in Cub Scouts serving on the Pack Committee and Webelos Leader for Pack 699. In Amory he was a member of First United Methodist Church serving as Finance Chair, Treasurer and various other committees. He and Sylvia volunteered as wish granters for Make A Wish which was a very rewarding experience. In 2015, he and Sylvia moved back to Texas (Huntsville) to be nearer to their grandchildren. He enjoyed college football, exercising, golf, fishing, computer time (emails), yard work, spending time with his grandchildren and traveling the world with his wife Sylvia. In Amory he was a member of the “King’s Ministry,” an outreach program which met monthly dedicated to raising money for Amory FUMC. He was also a member of the “Grand Isle/Camp Clark” fishing club made up of high school friends who enjoyed sharing fellowship twice a year. But more than anything, his passion and his life revolved around the love of his life and best friend, his wife Sylvia. He was preceded in death by his wife Sylvia, his son, Jeff, his parents, Jean Lee and Dick Jones, and his sister Jean Lee “Sissue” Everett. Survivors include one son Robert T. “Trez” Jones, Jr (Rhonda), granddaughters, McKenzie and Gracyn, grandson, Lochlan, brothers Dick (Joan), Craig (Barbara) and sister Dixie Lee Taylor (Danny), and many nieces, nephews, and cousins. A memorial service will be at 11:00 Am, Thursday, June 27, 2019 at the First United Methodist Church in Amory. In lieu of flowers the family requests that donations be made to the mission or charity of your choice or to Palmer Home for Children, PO Box 746, Columbus, MS 39703. Please share your memories and condolences with his family at eepicklefuneralhome.com

The family of Ted Jones created this Life Tributes page to make it easy to share your memories.

Robert T. “Ted” Jones was called home by his Lord and Savior...

Send flowers to the Jones family.