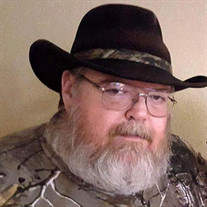 Smithville – Stevie Hal “Lil Crockett” Sargent, 56, passed away on Tuesday, October 31, 2017, at his residence in Smithville. Born on April 4, 1961, in Amory, MS, he was a son of the late Billy Eugene Sargent, Sr. and Mary Wardlaw Sargent. Smithville will never be the same with the loss of Lil Crockett. He was a graduate of Smithville High School. He married the love of his life, Rita Frederick, on June 21, 1980 and from that day forward they lived out a great love affair. Together they were blessed by God with a son. He was a true servant who loved the Lord and was a member of Smithville Baptist Church. During his lifetime, he worked in many occupations, including farming, logging, and heavy equipment operating. He retired as Road Foreman with Monroe County where he worked for 16 years. A true outdoorsman, thus his nickname, Lil Crockett loved being outdoors. He enjoyed hunting and he was a founding member of the Hooter Ridge Hunting Club. He enjoyed all seasons yet the fall was his favorite time and he enjoyed running deer dogs and feeding the deer. Camping and cooking the wild game he caught were some of his favorite past times. Giving, he would give away the food he caught. With a great love of family, he would cook supper for them every night sometimes using the food he grew in his garden. He enjoyed eating and visiting at Mel’s, watching Ole Miss football, and living life on his property which he called “The Hill”. Lil Crockett volunteered with the Smithville Fire Department and the Smithville Police Department. He was proud to have caught and pulled over his pastor twice during his years as a volunteer. A character like no other, he had a huge heart and was blessed with many friends who if he liked them, they were friends for life. He was very compassionate and had a great love for his family. He was a great big brother to his sister, whom he talked with often on the phone. Lil Crockett was a great imitator of other’s personalities yet there will be no one who can imitate him. Often loved ones would joke about the Sargent Copyrights for his famous recipes. A kind loving man with a big positive presence in the Smithville Community, he will be dearly missed by all that knew and loved him. He is survived by his wife of 37 years, Rita, Smithville; son, Neal Sargent, Smithville; sister, Donyce Sargent Parish, Fort Worth, TX; brothers, David Sargent, Smithville, and Phill Sargent (Faye), Amory; several nieces and nephews; special friends Mark and Heather Morrow; special pets, Blackie and Snowball. In addition to his parents, he was preceded in death by his brother, Billy Sargent, Jr., brother-in-law, Derrick Parish. His Funeral Service will be held at 11 AM, Friday, November 3 at E. E. Pickle Funeral Home with Bro. Chris Moody and Bro. Wes White officiating. Burial with follow in Maxey Cemetery. Pallbearers will be Bryan Pierce, Teddy Faulkner, Brad Stevens, Will Frederick, J. B. Kuykendall, Bill “Wop” Lovelady, Eddie Drake, and Robert Vaughn, Jr. Honorary Pallbearers will be Ed Cox, Bobby Harper, Glen Duvall, Eddie Kimble, Jeremy Flurry, and Bo Stevens. Visitation will be from 5 – 8 PM, Thursday, November 2, at the funeral home. Donations are requested to Smithville First Freewill Baptist Church, 63370 Highway 25, Smithville, MS 38870. Memories and condolences may be shared with his family at EEPIckleFuneralHome.com.

The family of Stevie Hal "Lil Crockett" Sargent created this Life Tributes page to make it easy to share your memories.

Send flowers to the Sargent family.