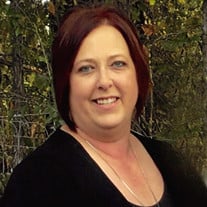 Stacie Nicole Runnels Cox Smithville –Stacie Nicole Runnels Cox, 42, passed away on Wednesday, February 13, 2019, at North Mississippi Medical Center, Tupelo. She was born on September 28, 1976, in Houston, Mississippi. Stacie graduated from Hatley High School with the Class of 1995. She also furthered her education at both ICC and Bevill State Community College where she attained her certification to be a licensed Phlebotomist. She believed strongly in the importance of getting a good education. Stacie worked for many years initially in Kidney Dialysis in both Aberdeen and Tupelo. Her patients felt her genuine care and she made friends was many people over the years. Stacie later worked with Dr. Thomas and a great group of people at the P & S Clinic in Amory. During her career, she touched many lives and gave comfort to those in need. Stacie accepted Christ as her Saviour at Greenwood Springs Baptist Church and was recently attending Pearce Chapel Free Will Baptist Church. Stacie married the love of her life, Lynn Cox on September 19, 1998, and they were blessed by God with two children, Aubrey and Lindsey. She was a loving wife, special daughter, and an incredibly supportive mother who worked 110% at being all she could for her children. Known for her Smithville pride, she loved the Seminoles and Lady Noles. She could always be found watching and supporting her children’s activities. She was a vital part of Smithville Booster clubs. She became part of a larger family of parents and players while attending her children’s sports activities. A true cheerleader, Stacie was well known for her vocal support of her teams. She was also an avid MSU fan and especially liked the Lady Bulldogs. Stacie was a good friend to all and when in her presence, one could feel her love as she freely expressed her feelings towards others. She cherished her time with her family, friends, and her pets, Bella and Buster. She loved the holidays, especially Christmas. A woman who didn’t stop, she loved to go fishing in her free time as well as driving the tractor around the farm and tending to the cattle. Some of her favorite songs were Mustang Sally, Seminole Wind, other various oldies and vintage music. Her favorite artist was George Strait and whenever she would hear the bagpipes played, she was touched greatly. She was considerate, sweet, supportive and competitive. She fought a tough battle and her suffering has been replaced by victory as she is now reunited with her family in heaven and is in the presence of her loving Saviour. Stacie leaves behind a legacy of wonderful memories for her family and friends to treasure until they all meet again. She is survived by her loving husband, Lynn, Smithville; daughter, Lindsey Nicole Cox, Smithville; mother, Gail Runnels, Amory; father and mother in law, Arlon and Ouida Cox; uncles and aunts, Randy and Mary Anderson; Roger and Cathy Runnels; Tony and Carol Hillhouse; Mike and Rita Bird; Richard and Brenda Baty; Dianne Munn; Vicki Watson; Sue Mears; Brenda Collums; Archie and Nadine Williams; Junior and Bett Tucker; sister-in-law and family, Ross and Emily Webster; host of nieces and nephews and cousins; special friends and family, Judy Easter, Dianne Munn, Miranda Seals, Sissy Powell, Carol Hillhouse, Mary Anderson, and Shanna Buse. She was preceded in death by her son, Aubrey; grandparents, Robbie Anderson; Lois and Troy Anderson; Bonnie and Albert Runnels. Her family would like to extend a special thank you to the physicians and nurses at North Mississippi Medical Center who cared for her. Her funeral service will be held at 2:00 pm, Monday, February 18, 2019, at Smithville Baptist Church with Bro. John Johnson and Bro. Jason Green with burial following at Pearce Chapel Cemetery. Pallbearers will be Jody Hillhouse, Chris Hillhouse, Chip Powell, Jason Munn, Hunter Leech, Adam Watson, Wayne Cantrell, Michael Sanderson, Anthony Bird, and Matthew Buse. Honorary Pallbearers will be John Noe, John Leech, Gary Bennett, Shane Murry, Tim Knight, Shawn Bird, Justin Bird, Shane Baty, Josh Baty, Chad Baty, Brad Stevens, Mark Marrow, Johnny Ware, Chris Harris, Chris Webb as well as the Lady Noles Softball Team. Visitation will be from 11:00 am until 1:50 pm on Monday, February 18, 2019, at Smithville Baptist Church. Donations may be given to the Youth Group of the Smithville Baptist Church, 63388 Highway 25 North, Smithville, MS 38870 or the Youth Group of Pearce Chapel, 60174 Pearce Chapel Rd, Smithville, MS 38870. Please feel free to share memories and condolences with her family at eepicklefuneralhome.com

The family of Staci Nicole Runnels Cox created this Life Tributes page to make it easy to share your memories.