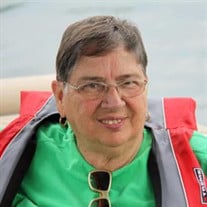 Byram/Amory - Shirley Ann Flowers of Byram, MS, born April 01, 1937 in Goodman, MS to the late Charles and Beulah Allen Flowers, passed away unexpectedly at her home on April 28, 2021 at the age of 84. Shirley’s career began at Southern Bell Telephone in 1955 and she continued to be employed there until her retirement some 40 plus years later. Shirley was also employed by the Jackson Police and Jackson Fire Departments, training others on the 911 call center, among other duties. World travel was one of her past-times and she enjoyed staying in touch with friends from around the country and the world. In recent times, Shirley’s passion involved genealogy and helping family on their search for their ancestors. She was a caring, generous person and would help anyone that needed help. She was a lifetime member of the Telephone Pioneers of America, a Past Matron of the Order of the Eastern Star of Temple Chapter #368 O.E.S., now affiliated with Leavell Woods Chapter #342 O.E.S., and a member of First Baptist Church in Amory, MS. She was preceded in death by her parents. She is survived by her aunt, Sara Francis Doty (Sis) of Beaumont, TX as well as many cousins and friends. Visitation will be Thursday, May 13, 2021 from 11:00 a.m. until the hour of the service at 1:00 p.m. at Chancellor Funeral Home in Byram, MS. A graveside funeral service, with Eastern Star Rites, will follow at 2:00 p.m. on Saturday, May 15, 2021 at the Masonic Cemetery in Amory, MS. In lieu of flowers, you may donate to St. Jude Children’s Hospital or to The Boy’s Town.

Byram/Amory - Shirley Ann Flowers of Byram, MS, born April 01, 1937 in Goodman, MS to the late Charles and Beulah Allen Flowers, passed away unexpectedly at her home on April 28, 2021 at the age of 84. Shirley&#8217;s career began at Southern... View Obituary & Service Information

The family of Shirley Ann Flowers created this Life Tributes page to make it easy to share your memories.

Send flowers to the Flowers family.