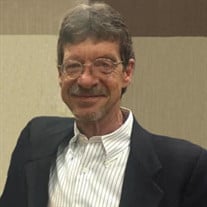 Amory – Rodney Shay Ross, 59,passed away on Monday, January 18, 2021, at North Mississippi Medical Center – Gilmore, Amory, MS. Born on October 16, 1961, in Waukegan, Illinois, he was a son of Gwyn Wallace Bacot and the late Stanley Ross. Shay grew up in Illinois, Natchez, Louisiana, and Amory. He graduated with the Amory High School class of 1979. A determined man, later in life, Shay went back to school. He furthered his education in Florida and graduated from Florida State University in 1994. Needless to say, Shay was a diehard Florida State fan. He worked for many years serving the public. His job, in the tourism industry, carried him to many places in the United States. He worked on the Mississippi Queen Steamboat out of New Orleans. He was a server, wine steward, and later became the maître d’ on the Mississippi Queen. With great attention to detail, he always ensured that his customers’ experiences were wonderful. He was blessed during his lifetime, with a loving wife, Kim, and a son, of whom he was very proud. Shay was Catholic and he believed in God. He was a great husband, wonderful father, and he always had a generous heart for those in need. In life, his family meant the world to him. He loved to cook and entertain, oftentimes sharing his meals with others. He often played classic rock music or sports talk radio. Football was definitely one of his main passions, he watched a lot of football and his knowledge of the teams and their players was amazing. Some of his close friends were Steve Hitt, Steve Robertson, Jay Vaughn, Ron Ivy, Mike Malski, and Robbie Hall. Shay was a jokester, and he kept these guys on their toes. Having been exposed to so many different cultures and ways of life, Shay’s life was full, yet his family and friends mourn his much too early departure. They are comforted knowing he is with God and they will cherish all the memories made with him through the years. His legacy will live on in their hearts. His is survived by his wife, Kim Hitt Ross, Amory, MS; son, Alex Ross, Amory, MS; mother, Gwyn Bacot (Bill), Natchez, MS; sisters, Rhonda Young (Lee), Nashville, TN, Nikki Bacot, Natchez, MS; brother, Mike Ross (Jan), Baton Rouge, LA; sister-in-law, Gayle Brown (Darrin), Amory, MS; brothers-in-law, Steve Hitt, Aberdeen, MS, Chris Hitt (April), Amory, MS; a host of nieces and nephews; and many good friends. He was preceded in death by his grandparents and father, Stanley Ross. A memorial service to celebrate Shay's life will be on Saturday, January 30, 2021 at 11:00 am at Forward Church with Bro. Greg Huguely officiating. Memories and condolences may be shared with his family at EEPickleFuneralHome.com

The family of Shay Ross created this Life Tributes page to make it easy to share your memories.

Send flowers to the Ross family.