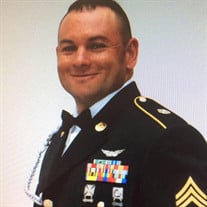 Amory—Our community is sincerely mourning the loss of Kenneth Antonio “Tony” Coxey, 42, who passed away on Monday, September 24, 2018. Tony was born on October 15, 1975, in Dayton, TN to Darlene Kelton and the late Kenneth Coxey. Tony was a lifelong resident of Monroe County. He graduated from Smithville High School with the Class of 1994. In April of 1996, at the age of 20, he decided to join the Army National Guard. He proudly served this country for over 20 years and his heart was dedicated to being a public servant. In 1999, Tony joined the Amory Police Department and began his career in law enforcement. He was a devoted patrolman for the city of Amory as well as a part-time patrolman with the Smithville Police Department. His law enforcement career came to a halt in 2004 when he received orders to serve our Nation in Operation Iraqi Freedom. Tony was deployed to Fallujah, Iraq, where he served for 18 months as a Supply Sergeant with the 155th ABCT. Upon his return home, he was hired as a road deputy with the Monroe County Sherriff’s Office. Tony later became a Lieutenant with the Narcotics Division. Tony also served as a part time patrolman for the cities of Nettleton and Hatley. He returned to Iraq from 2009-2010 as Personal Security Detachment for Col. Glasgow. In 2011, He was deployed for NATO (Bosnia) as Personal Security Detachment for General Huffman. Tony retired from the Army National Guard as an SFC E-7. Tony then worked for the Alabama and Gulf Coast Railway. While employed, he was in a serious train accident and with God’s help; he again proved his fighting determination by defeating the odds placed against him. He later used this accident to show that God had bigger plans for him. He boldly shared his testimony of how God pulled him through. Tony was truly a man of God, and was always ready to share his faith and love to the people around him. His incredible love for God, his family, his Country, and his community was shown through his works. He grew up in the Bethel Apostolic Church. He was baptized at the People’s Tabernacle Church in Sulligent and also served as a Sunday school teacher. He currently was a faithful and active member of the 1st Pentecostal Church in Verona, serving as a Sunday school teacher and welcomed everyone to church before the church service began. Tony also loved worshipping with Apostolic Truth Tabernacle Church in Amory. He proudly served not only his Country, but his local community as well. He made an impact in this area that will not be forgotten. Tony was a man that was wise beyond his years; he was a man who had a contagious smile and could bring laughter on dreary days. He was a loving son and brother, and created many wonderful memories with his family. Tony’s family is looking forward to their reunion with him one day. Our community will always be grateful for his service and testimony. Tony is survived by his mother, Darlene Kelton (Jerry), Booneville; sister, Charlene Holt, Booneville; brothers, Craig Coxey (Tonia), Nettleton, Michael Coxey (Ashley), Pontotoc; grandmother, Louise Oliver, Amory; and several nieces and nephews. He was preceded in death by his grandfather, Hershal Oliver; and his father, Kenneth Coxey. His funeral service will be held on Sunday, September 30, 2018 at 2:00 pm at Meadowood Baptist Church, Amory. Bro. John McAllister and Bro. Charles Petty will officiate. Burial with full Military Honors will follow at Fig Hill Cemetery in Hamilton, MS. Members of the U.S. Armed Forces will serve as pallbearers. Honorary pallbearers will include Sam Mitchell, Jason Miller, Billy Ritchie, Tim Oswalt, Eric Sloan, Royce Ketton and his fellow brothers in law enforcement. Visitation will be Saturday, September 29, 2018, from 5:00 pm until 8:00 pm at Meadowood Baptist Church, Amory. Donations may be made in Tony’s honor to a church of your choice in Monroe County, MS. Memories and condolences may be shared with his family at eepicklefuneralhome.com

The family of SFC E-7 Kenneth A. 'Tony' Coxey, US Army Ret. created this Life Tributes page to make it easy to share your memories.

Amory—Our community is sincerely mourning the loss of Kenneth...

Send flowers to the Coxey, US Army Ret. family.