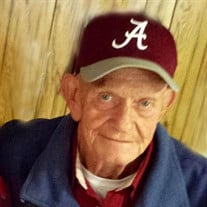 Scotty “Butch” Johnson Nettleton – Scotty “Butch” Johnson, 70, passed away on Wednesday, April 21, 2021, while at his residence in Nettleton, MS. Born on October 7, 1950, in Lamar County, Alabama, he was a son of the late Robert Wilson Johnson and Josie Rene (Haynes) Johnson. Butch attended school in Alabama and grew up in a large family. He was a hard working man who put his family first always. During his lifetime, Butch drove a truck for a while then he worked as an upholsterer at People Lounger. After many years of service, he retired to enjoy life. In 1996, he married the love of his life, Jean Ray Johnson and they had many happy years together. She was his best friend, they did everything in life together and he loved her dearly. A kind person, Butch was a member of Bigbee Baptist Church. He believed in God and often put others before himself. Butch was a diehard Alabama football fan who was always proud to wear Crimson. He liked to listen to Country and Gospel music. Butch enjoyed the outdoors, especially gardening, fishing, and camping. A simple man, who loved his wife dearly, Butch will be missed by all that knew him and cared for him. They will cherish the good memories for generations to come. He is survived by his wife, Jean Ray Johnson, Nettleton; step-son, Danny Brookman (Jill), Nettleton; step-grandchild, Daniel Brookman (Candice); step-great-granddaughter, Sadie Grace Brookman; brother, Charles Edward Johnson (Jo), Tupelo; a host of nieces and nephews. In addition to his parents, he was preceded in death by his sisters, Dorothy McCullar, Tollie Ray McCullar; brothers, James Earlie Johnson and Robert Joe Johnson. A Funeral Service for Butch will be held on Tuesday, April 27, 2021 at 11:00 am, at E. E. Pickle Funeral Home in Amory with Bro. Justin Haynes officiating. Burial will follow in Wofford Cemetery, Lamar County, AL, with pallbearers being Jordan Smith, Andrew Caldwell, Brady Smith, Jason Britt, Rob Sargent, and Shane Woods. Visitation for family and friends will be held from 10:00 am until 11:00 am, on Tuesday, at E. E. Pickle Funeral Home, Amory, MS. Memories and condolences may be shared with his family at EEPickleFuneralHome.com

The family of Scotty "Butch" Johnson created this Life Tributes page to make it easy to share your memories.