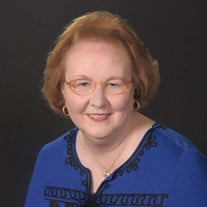 Sara Lee Wiygul Hathcote was welcomed into the loving arms of her Mother, Gertrude Eudora Jones Wiygul and her Father, Russell Lemoin Wiygul on August 22, 1947 and again in Heaven on January 5, 2019. She attended Amory Jr.-Sr. High School graduating in 1965 and First Baptist Church in Amory, MS where she was friends with and fell in love with Wayne Mitchell Hathcote. Wayne showed up one night for a date to a Valentine’s Banquet at the church, but didn’t have any candy, only a corsage, and a ring she couldn’t see. She wondered where the candy was. After he proposed, they were supposed to be in a skit at the Valentines Banquet, where she was supposed to be mad at him. He was to sing to her, “Let Me Call You Sweetheart, I’m in love with you” and after 53 years he still is in love with her. They both have shared the same music interest, having sung in the Church Choir for over 50 years. They prefer Southern Gospel Music, Traditional Church Hymns, and Choir Anthems because of the story or truths they tell. They also enjoy Bluegrass and Mountain Music hymns and loved making trips to the Great Smoky Mountains. Wayne told her when they married on September 5, 1965, that he didn’t want her to have to work and for the most part she didn’t have to. Sara was employed by The Bank of Amory for a short time and taught 4-year-old Kindergarten at First Baptist Church, Amory for many years. Wayne and Sara moved to Theodore, AL in 1979 a few days before Hurricane Frederic hit and became members of First Baptist Church of Theodore, AL. Sara was a stay at home housewife, but while attending a youth event at First Baptist Tillman’s Corner, with youth from First Baptist Church of Theodore, realized that she was lost and accepted JESUS as her Savior on September 6, 1981. Sara had walked the isle as a child simply to get her Dad to go, but didn’t understand that simply going forward didn’t make you a child of GOD. She worked as a housewife the rest of her time in Theodore, except for a period where Wayne lost his job and was out of work for 14 months. During that time she helped with income by working for McRae’s Department Store in Mobile, AL and later for Key Wall Covering Division of BLP Mobile Paint Manufacturing Company. Sara loved to decorate her home, whatever the season; Valentines, Easter, Fourth of July, Thanksgiving, but especially Christmas. She has had as many as 10 Christmas Trees decorated at one time. After 53 years of marriage, Sara has gone to her heavenly home, to be healed and walk on streets of gold, leaving behind her husband, Wayne Mitchell Hathcote of Theodore, AL; her son, Terry Wayne Hathcote, daughter-in-love, Ellen Etheredge Hathcote, and grandson Steven Thomas Hathcote of Montgomery, AL; and her son, Jonathan Russell Hathcote, daughter-in-love Dana Marie Webb Hathcote, grandson, Ryne Mitchell Hathcote, and granddaughter, Evaleigh Naomi Hathcote of McKinney, TX. In addition to her parents and a stillborn brother, James Russell Wiygul, she was predeceased by her grandparents Elis Alver Wiygul and Alla Lee Bourland Wiygul; Farris Richard “Bud” Jones and Sarah Eudora “Sally” Hutchins Jones. She will be missed by all who knew her, especially her Husband of 53 years. Sara’s faith and Wayne’s faith still holds on to the CHRIST of Calvary. We pray that as you read this about Sara, that you too know and hold on to the CHRIST of Calvary as they do! Services will be held Monday, 1/7/2019, 2:00PM on at First Baptist Church, Tillmans Corner in Mobile, AL with a 2 hour visitation prior to the service. A second visitation period will be held at E.E. Pickle Funeral Home in Amory, MS on Tuesday, 1/8/2019, from 5:00PM until 8:00PM. A Memorial Service will be held Wednesday, January 9, 2019, at 11:00 AM at First Baptist Church, Amory, MS.

The family of Sara Lee Wiygul Hathcote created this Life Tributes page to make it easy to share your memories.

Sara Lee Wiygul Hathcote was welcomed into the loving arms of...

Send flowers to the Hathcote family.