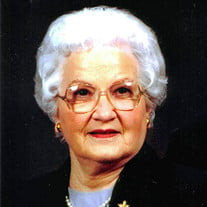 Amory— Sara Ann Jones Carlson, 87, and lifelong resident of Amory, left this world to enter her heavenly home on Thursday, February 28, 2019. Born in Amory on December 29, 1931, she was the only daughter among four sons of Farris Boyd and Madia Hartsell Jones. Sara graduated from Amory High School in 1949. Prior to that graduation, she eloped with her forever love, John Carlson. The announcement of the marriage was made during high school graduation on graduation night. The couple made a life of family owned businesses and many outdoor recreations. The first business was a soda shop on main street Amory in 1949-1950. The soda shop transitioned to a small grocery store in 1950, and then to a larger general store, Carlsons Grocery, an Amory mainstay for 39 years. Retiring from the grocery business did not slow Sara down. She loved being in the people serving business, had a flare for developing friendships and bringing sunshine to others. Post Carlson Grocery she worked as a part time bank teller with every bank in town, a florist in several flower shops, and as a tour guide at the Amory Museum. Sara was available for just about any part time job serving or people assisting activity such as The Amory Pants Store, Barnyard Bushes & Nursery, assisting with window treatments, upholstery and remodeling projects, delivering Meals on Wheels, and just spreading sunshine. Sara was the oldest living charter member of North Boulevard Christian Church, where she was faithful to her calling as a servant to many. She was especially committed to her Ladies Sunday School Class, serving as their treasurer and overseeing gifting to those in need for many years. Sara lived a life of great faith and as a loving member of her community. She was a life time member of the Eastern Star, when in 1957 she was the youngest member to ever serve as Worthey Matron of an Eastern Star Chapter. In 1987, Sara was the first woman to be appointed to the City of Amory Planning Commission where she served for 14 years. She participated in several local garden clubs and was always ready to join in any card or board game. Always a people person, Sara was often described as the sweetest lady and the hardest working person anyone knew. In younger days she enjoyed boating and camping with John; then free time evolved into working in her yard, traveling, and making desserts. She knew almost everyone’s favorite (such as a pecan pie, angel food cake, special cookies, coconut cakes, candies) and would make sure to deliver her treats to friends on holidays and any special day of remembrance. As a lover of nature and flowers Sara was a collector of porcelain figurines of birds and flowers. She loved her God, her family and her town. Sara is survived by her daughter, Charlotte Carlson of Little Rock, AR & Amory; sister-in-law, Betty Jones, brother, James Harold Jones; many nieces, nephews, and cousins; and a multitude of friends. She will be dearly missed by all who knew her. In addition to her parents, Sara was preceded in death by her husband, John Carlson; and brothers, William Boyd “Bill” Jones, Claude Richard “Bub” Jones, and Charles Edwin “Sonny” Jones. A Celebration of a Life Well Lived service will be held on Thursday, March 7, 2019 at 1:00PM at E.E. Pickle Funeral Home Chapel in Amory, with Bro. Tony Stahl officiating, a special message from Bro. Lloyd Minor, and with Buzz Wilkinson offering a closing message and prayer. Pallbearers will include Barry Jones, Mike Jones, John Castle, Vernon Watson, Jackie Palmer, and Bob Hill. Visitation will be from 11:45 AM until the service hour on Thursday. In lieu of flowers, donations may be made to: Amory Main Street, 322 North Main Street, Amory, MS 38821 Please share your memories and condolences with her family at eepicklefuneralhome.com

Amory&#8212; Sara Ann Jones Carlson, 87, and lifelong resident of Amory, left this world to enter her heavenly home on Thursday, February 28, 2019. Born in Amory on December 29, 1931, she was the only daughter among four sons of Farris Boyd... View Obituary & Service Information

The family of Sara Ann Carlson created this Life Tributes page to make it easy to share your memories.

Send flowers to the Carlson family.