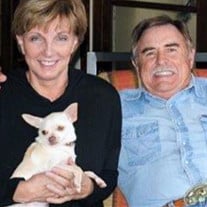 Shannon— Sam Hubbert, 79, passed away peacefully on Sunday, August 26, 2018, at NMMC in Tupelo. Born in Winfield, AL on December 30, 1938, he was a son of C.W. and Freeda Smith Hubbert. Sam graduated Winfield High School with the Class of 1957. He then attended Florence State University for two years before joining the U.S. Navy, where he served for two years. While in service, he had the opportunity to travel and see the world. Upon returning home, Sam began his career working as a welder at Brown-Root Oil Company. He married his loving wife, Cathy, on May 25, 1978, and together they were blessed with two children. He later owned and operated Stockyard Inc in Tupelo and stayed in the cattle business until his passing. Sam was passionate about his business and believed in a hard day’s work. He was of the Church of Christ faith. An independent, self-made man, Sam enjoyed his way of life. He was a true man of his word and valued his friendships. Sam loved his family, who he shared a full, wonderful life with. His family takes comfort in knowing that he is at peace in Heaven, looking down on all of us and saying, “It’s been quite a party.” He will be dearly missed by his friends and loved ones. Sam is survived by his wife of 40 years, Cathy Sims Hubbert, Shannon; daughter, Jennifer Hubbert Patton (Trey), Pontotoc; son, Jordan Hubbert (Desiree), Shannon; grandchildren, Cruz, Mila, and Zyla Patton, Brynn and Bennett Hubbert; sister, Alyce Hubbert, Fayetteville, GA; many nieces and nephews; family friends, Terry Brown and Carolyn Kingsley; and a host of special friends. In addition to his parents, Sam was preceded in death by his brothers, Henry, Joe, and George Hubbert. At Sam’s request, no formal services will be held. Memorials and donations may be made to Alzheimer’s Research Foundation, 3125 Little Road, Suite 146, Trinity, FL 34655 Memories and condolences may be shared with his family at EEPickleFuneralHome.com

Shannon&#8212; Sam Hubbert, 79, passed away peacefully on Sunday, August 26, 2018, at NMMC in Tupelo. Born in Winfield, AL on December 30, 1938, he was a son of C.W. and Freeda Smith Hubbert. Sam graduated Winfield High School with the Class... View Obituary & Service Information

The family of Samuel E "Sam" Hubbert created this Life Tributes page to make it easy to share your memories.

Send flowers to the Hubbert family.