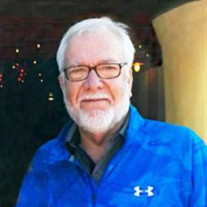 Amory - Sammie Cayce Stevens, 72, left his earthly home for his forever one on May 14, 2021, surrounded by his wife and daughter. Born in Amory, Mississippi on September 4, 1948, Sam was the son of Sam and Grace Harrison Stevens and the brother of Margaret Stevens. He always had an inquisitive nature and was notorious for once being put on every area church’s prayer list by his mother. In 1970, Sam met the love of his life, best friend and soul mate, Patricia Betts. They eloped to Vernon, Alabama on December 16, 1970 and never did stop being newlyweds, even after 50 years of marriage. Sam spent his life ensuring that his “Tricia” never wanted for anything and was known for spoiling her with lavish proofs of his undying adoration for her. In turn, she never left his side, even when his lung disease worsened. Hers were the last words he heard on earth while Patricia and their daughter, Lindsey, held him until he took his last breath. Sam was a man of great faith. He was the epitome of a Christian as he gave without expecting anything in return and he mentored hundreds of people through the years by sharing his incredible testimony. He was never judgmental and always eager to help whenever, wherever, however. Sam began working for the family business, Sam Stevens Motors, under his father’s leadership, and fell in love. Sam was a car man through and through. He loved what he did and was known for bringing never before seen automobiles to Amory such as conversion vans. He loved getting to meet new people everyday at the car lot and most are still friends to this day. Sam was known for being very altruistic. One of his life’s greatest works was being President of the Amory Public School District’s School Board for 16 years. He took his job very seriously and helped countless students and teachers during his tenure. Education has always been one of the nearest causes to him because both his mother and wife were teachers and he knew how invaluable having a degree can be. One of his other greatest moves was his Harley Davidson motorcycle. While he liked being out on the open road, his favorite part was the lifelong friendships he made in riding with Dr. Len Pinkley and Mr. Frank Koenig. Theirs was a true brotherhood that lasted long after the bikes were retired. Perhaps his two other greatest joys in life were his children, Brandon and Lindsey. He worked hard everyday to make sure they always had what they needed and to make them feel special and loved. Every holiday and birthday were made perfect because of the thought, love and attention he put into each and every gift and card. Of all the many jobs and roles Sam had, his favorite was being a grandfather. He’s the grandparent most children only dream of having. On Christmas Eve, he crept into his grandchildren’s rooms dressed as Santa Claus to lay out gifts and pose for pictures while they slept. At night, he read them bedtime stories. And last summer, he installed the biggest water slide available just so he could hear his grandchildren laugh with pure joy. Sam will be missed by his family he loved so dearly. While no birthday, holiday or ordinary day will ever be the same without him in it, he will always be remembered for the man he was: a loyal son, fun loving brother, devoted husband, thoughtful friend, loving father and attentive grandfather. He will always be seen in the red birds that soar through the sky and the glowing stars at night. He is survived by his wife of 50 years, Patricia Betts Stevens; his son, Brandon (Lindsey) of Cleveland, Ohio; his daughter, Lindsey (Houston) of Tupelo, Mississippi; his sister, Margaret LeBlanc (Keith) of Clearwater, Florida; and his grandchildren: Brayden and Gracie Stevens of Cleveland, Ohio and Holden, Patterson and Thompson Martin of Tupelo, Mississippi. Sam is preceded in death by his father, Sam Daily Stevens, and his mother, Grace Harrison Stevens. E.E. Pickle Funeral Home in Amory will be lovingly handling all of the arrangements. In lieu of flowers, the family would be honored and delighted to have donations placed to the Sam Stevens Memorial Scholarship Fund at Community Bank in Amory. A celebration of life service will be held at The Arbors of Amory on Wednesday, May 19, 2021, at 5:00 in the evening. “I have fought the good fight, I have finished the race, I have kept the faith.” 2 Timothy 4:7

Amory - Sammie Cayce Stevens, 72, left his earthly home for his forever one on May 14, 2021, surrounded by his wife and daughter. Born in Amory, Mississippi on September 4, 1948, Sam was the son of Sam and Grace Harrison Stevens and the brother... View Obituary & Service Information

The family of Sam Cayce Stevens created this Life Tributes page to make it easy to share your memories.

Amory - Sammie Cayce Stevens, 72, left his earthly home for his...

Send flowers to the Stevens family.