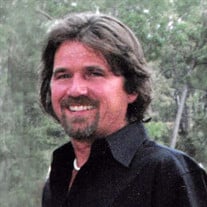 Russ Coleman Wren— Danny Russell “Russ” Coleman, 53, passed away on Sunday, October 7, 2018, at NMMC in Tupelo. Born on May 3, 1965 in Amory, he was the son of Danny and Verna Coleman. Russ graduated Amory High School with the Class of 1983. Although he farmed all of his life, his career started at True Temper, where he worked for 16 years. He then spent another 16 years as an entrepreneur in his own business, Rhino Linings. Russ was a longtime member of First Baptist Church. He married his loving wife, Jenny, on July 4, 2007, and together they made many cherished memories. Russ was the kind of man who would give anyone the shirt off his back. He was a kind soul who could make a room fill with laughter. He was often described as selfless, caring, and a very hard worker. Russ offered his help to anyone in need, and never met a stranger. Russ loved everyone he met. He touched many lives. He had a gentle heart and a strong head, and he truly fought the good fight and won. Russ loved to be outdoors, where he could fish with his wife, Jenny, go hunting, and ride horses. He loved to spend time with his much-loved animals, especially his dog. He had a special connection with animals, and valued each and every kind. For fun, Russ would often ride motorcycles or turn the radio to 99.9 and listen to rock-and-roll everywhere he went. Above all, Russ loved his daughter, Dani. He was loved by his family who are mourning his loss. The void is real, but this is not goodbye. His family awaits the reunion again one day and celebrate that he is at peace in heaven. Russ is survived by his wife, Jenny Berry Coleman, Wren; daughter, Dani Coleman, Amory; parents, Danny and Verna Coleman, Amory; sister, Tracey Riddle (Nelson), Amory and their children, Rebecca Riddle and Cole Riddle (Rebecca); step-son, Trey Mattox (Lindsey), and their children, Matthew Britton and Miller Kate Mattox; and many friends. He was preceded in death by his grandparents, J.D. and Peggy Coleman, Maurice and Leona Clay; step-son, Matthew Mattox; and friends, Nedra and Frank Berry, Sr. A funeral service will be held for Russ at 2:30 PM Tuesday, October 9, 2018 at E.E. Pickle Funeral Home, Amory. Dr. Allen Simpson and Bro. Dennis Smithey will lead the service. Burial will follow at Amory Historic Cemetery in Amory. Pallbearers will include Dustin Eddington, Joe Chism, Rickey Moffett, Brad Tate, Gary Harper, and Byron Riddle. Honorary pallbearers will be Hob Sanderson, Ira Gladney, Rollin Turnage, Charles Jones, and Ray Wright. Visitation will be from 12PM-2:20PM Tuesday at the funeral home. Donations may be made to the Amory Humane Society, P.O. Box 218, Amory, MS 38821; or to a local church of your choice. Memories and condolences may be shared with the family at eepicklefuneralhome.com

The family of Russ Coleman created this Life Tributes page to make it easy to share your memories.

Send flowers to the Coleman family.