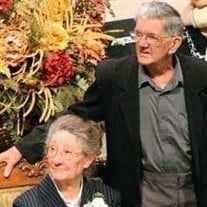 Amory — Billy Ray Sorrells, 74, stepped into Glory on Saturday, February 22, 2020. His loving wife, Ruby Faye Johnson Sorrells, followed close behind on Sunday, February 23. Billy Ray was born in Caledonia, MS on June 11, 1945 to the late William Asberry and Romie Smith Sorrells. Ruby was born in Saltillo, MS to the late Cecil and Mauvelean Lyles Johnson on July 12, 1938. Billy Ray met Ruby in January of 1970. They fell in love and after five weeks of dating, they married at the courthouse in Vernon, AL on February 7, 1970. Together they were blessed with two children, David Ray Sorrells and the late Brenda Kaye Sorrells. Billy Ray and Ruby were faithful members of Aberdeen First Pentecostal Church. Their faith and their children and grandchildren were always placed first in their household. Billy Ray was a strong-willed provider for his family and cared deeply for each of his loved ones and friends. Ruby was a devoted wife, mother, and grandmother that instilled love and faith in Jesus Christ to her family. The couple cultivated many beloved friendships over the course of their lives. They cherished their friends and family and will be dearly missed by those who knew and loved them. Billy Ray and Ruby are survived by their son, David Ray Sorrells (Christy), of Athens; grandchildren, Raeleigh and Ethan Sorrells; and a host of nieces and nephews. Ruby leaves behind a sister, Sarah Nell Johnson (David); and brothers, A.D. Johnson and Bobby Johnson (Pam). Billy Ray is also survived by his sister, Christine White; and brothers, Earnest Sorrells (Joyce), and Danny Sorrells (Shirley). Billy Ray was preceded in death by his daughter, Brenda Kaye Sorrells; and sisters, Donnie White, Eula Smith; and brothers, Wiley and Ed Sorrells. In addition to her daughter, Ruby was preceded in death by her brothers, Truman and Tommy Johnson. A funeral service will be held for Billy Ray and Ruby at Aberdeen First Pentecostal Church at 4PM on Thursday, February 27, 2020 with Rev. Rickey Bowen and Rev. James Terry officiating. No graveside services will be held. Burial will be in New Chapel Cemetery in Itawamba County. Visitation for the couple will be Wednesday night from 5-8PM at the church. Memories and condolences may be shared with the family at eepicklefuneralhome.com

The family of Ruby Faye Sorrells created this Life Tributes page to make it easy to share your memories.

Send flowers to the Sorrells family.