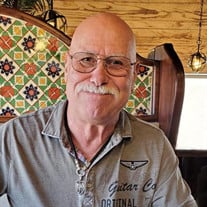 Ronnie H. East Smithville/Columbus – Ronnie H. East, 68, passed away on Saturday, October 17, 2020, at North Mississippi Medical Center, Tupelo, MS. Born on January 6, 1952, in Arkansas, he was a son of the late Gervis “Doc” Howard East and Bobbie Lou Jones East. Ronnie grew up Arkansas, attended High School, and received his certification as a Computer Technician. He served in the United States Army during the Vietnam War. He was blessed by God during his lifetime with two loving wives, three children, many grandchildren, and six great-grandchildren. Ronnie was a great provider and role model for his family. He worked initially at Marathon and later at Omnova Solutions Inc. Finally, he served for many years with the Lowndes County Sheriff’s department until his retirement. He was a giving public servant, a true Christian, and he enjoyed spreading the Gospel more than anything else. In his free time, Ronnie enjoyed riding motorcycles, Ronnie was a member of the “Chariots of Light” Christian Bike group. He was a former NRA member and followed the Andrew Wommack Ministries faithfully. A jokester, he always lightened the mood in a room especially when he spoke strange sounds to his dogs which only brought big smiles to those around. One of his close friends was Danny Holt and they often liked to camp together at Dwayne Haynes Campground. Ronnie listened to Country and Gospel music and often he would spend many the days working outside. He enjoyed building things and he was a great handyman. A loving husband and great father, Ronnie made many memories through the years with his family. Through his ministry of reaching others for Christ, Ronnie was able to touch many lives with an eternal impact. Above all, his testimony will be his greatest gift to his family and friends. They will miss him dearly yet they know he is with his Savior. Left behind to treasure his memories are his wife, Dolores Ann Thompson East, Smithville; daughters, Toni Knight (Shane), Hatley, Meredith East Weathers (David), Caledonia; son, Jason H. East (Tiffany), Columbus; grandchildren, Jerren Woods, Cody Woods, Justin Fore, Kameron Weathers, Zach Weathers, Kayla East, Brayden East, Evelyn Boykin, Cameron Boykin, and Maddie Boykin; six great-grandchildren; sister, Lisa East Wallace (Ron), Brentwood, TN; brother, Rick East, Punta Gorda, FL; mother-in-law, Ethel Wigginton, Smithville, MS; a host of nieces and nephews. In addition to his parents, he was preceded in death by his first wife, Sandra Ford East; brother, Dennis East. A Graveside Funeral Service will be held on Tuesday, October 20, 2020, at 3:00 PM, at Pickle Cemetery, Greenwood Springs, MS with Bro. Greg Huguley officiating. Burial will follow and the pallbearers will be Jerren Woods, Cody Woods, Justin Fore, Zach Weathers, and Collin Hamby. Visitation for family and friends will be on Tuesday, October 20, 2020 from 1:00 pm until 2:00 pm at the funeral home in Amory, MS. Memorials in lieu of donations may be made to one’s favorite charity or to the Charis Bible College in Colorado Springs, CO. Memories and condolences may be shared with his family at EEPickleFuneralHome.com.

The family of Ronnie H. East created this Life Tributes page to make it easy to share your memories.

Send flowers to the East family.