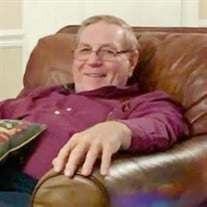 Nettleton – Roger Jay Lawrence, 71, started his new life in Heaven on November 15, 2020. Born on October 17, 1949, in Decatur, Michigan, he was a son to the late Millard E. and Mildred DePalma Lawrence. Roger graduated from Decatur High School in Michigan in 1968. After graduation, he served proudly in the United States Navy where he was assigned to the USS Franklin D. Roosevelt. A patriot, he was an E-4 and fought during the Vietnam War. After serving in the military, he moved to Mississippi and married the love of his life, Shirley Kay Harlow Lawrence on August 31, 1973. He furthered his education at I.C.C., studying drafting and design. A great provider for his family, he worked over 42 years at True Temper Sports until his retirement. He was blessed throughout his life time with a loving wife, two wonderful daughters, and a host of special nieces and nephews whom he loved like his own grandchildren. In addition to working at True Temper, Roger worked many years as a skilled Taxidermist. He was a master of God’s creation. A true family man and friend to all, Roger had a big heart and was very considerate of others. He loved his family dearly and set a fine example for them as he loved God first and lived out his faith daily. Roger was a faithful member of the Shannon Church of Jesus Christ and his church members were his extended family. Roger gave freely to Missionaries, believed deeply in spreading the Gospel, and he loved listening to Gospel music. In his free time, Roger liked hanging out with his some of his close friends, including Mark Davis, Wayne Conwill, and his Taxidermy Customers. He could often make others laugh, as he would say things off the wall due to being hard of hearing. Roger loved hunting and was an accomplished sculptor. He was a member of the Case Knife Club in New Albany. A bird enthusiast, Roger loved watching Purple Martins and Hummingbirds. He enjoyed attending Hummingbird Festivals and he was a member of the Purple Martin Conservation Association. He leaves behind many wonderful memories, pieces of art, and a fine example of a Christian man, for his family and friends to cherish. They have comfort knowing that he is with his Lord and Savior. Left behind to treasure his memories are his wife, Shirley, Nettleton; daughters, Emily Lawrence, Nettleton, Natasha Bradford (Shannon), Ball, LA; sisters, Linda Faye Patterson, Apopka, FL, Ellen Maycock, Apopka, FL; brothers, A.J. Lawrence (Joyce), Perry, FL, Doug Lawrence (Linda), Orlando, FL, and David Lawrence, Hawaii; and a host of special nieces and nephews. In addition to his parents, Millard E. and Mildred DePalma Lawrence, he was preceded in death by his sister, Dorothy Hebrock. A Funeral Service will be held at 2:00 pm, on Tuesday, November 17, 2020, at E.E. Pickle Funeral Home in Amory, MS, with Bro. Paul Beam and Bro. Larry Hill officiating. Burial will follow in Jones Chapel Cemetery, Nettleton, MS, with the pallbearers being Allen Harlow, Randol Harlow, Mark Davis, Shannon Bradford, Brad Harris, Josh Robinson. Honorary Pallbearers being Truman Presley, Ronnie Jernigan, Reggie Minich, Jamie Rowe, Phillip Duke, Gerald Mitchell and Henry Humble. Visitation for family and friends will be on Tuesday from 12:30 pm until the service hour at the funeral home in Amory. During the visitation and funeral service, the family request that you please practice social disticing and that you wear a mask Memories and condolences may be shared with his family at EEPickleFuneralHome.com

Nettleton &#8211; Roger Jay Lawrence, 71, started his new life in Heaven on November 15, 2020. Born on October 17, 1949, in Decatur, Michigan, he was a son to the late Millard E. and Mildred DePalma Lawrence. Roger graduated from Decatur High... View Obituary & Service Information

The family of Roger Jay Lawrence created this Life Tributes page to make it easy to share your memories.

Send flowers to the Lawrence family.