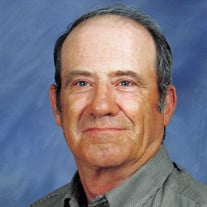 Amory—Robert Ray McNeese, 78, died peacefully at his residence on September 23, 2017. Born on September 7, 1939 in Greenwood Springs, he was the son of the late James Thomas and Maggie Jane Heard McNeese. Robert attended Greenwood Springs High School. Soon after, he began his occupation at Pullman Couch. He went to work for Walker Manufacturing after his time spent at Pullman. Robert was also self employed for 10 years while he ran a grocery and furniture store. He then worked with MDOT, where he would retire after many years of highway maintenance. In his free time, he enjoyed listening to country music, Gaithers, and The Oak Ridge Boys. He would often be found playing dominos or pool, or boxing. A true craftsman, Robert enjoyed wood building projects. He spent much of his time working in the garden, and giving the produce away to his neighbors and friends. Robert was a man of faith, and a member of Meadowood Baptist Church. He was a Training Union director at East Amory and strived to lead others in his love for Christ. He loved his family and enjoyed spending time with his grandkids. Robert had many great friends, including the late R.C. Minich, Bobby Tribble and Joel “Bud” Plunkett. They are all reunited in heaven now. His family guided his life, and he made sure to bestow a legacy of love and happiness within each of them. He will be dearly missed by his family, but he is in his heavenly home now. Robert is survived by the love of his life, Hilda Ruth Forbus McNeese; daughter, Sheree Perkins (Donald), Yorktown, VA; Ricky McNeese (Wanda), Amory, Greg McNeese (Lisa), Smithville; grandchildren, Michael McNeese, Seth McNeese, Megan Gray (Justin), Trey Perkins (Shannon), Daniel Perkins, Claire McNeese, Will McNeese; sisters, Odene Woods, Dallas, TX, Betty Easter (J.D.), Aberdeen, Linda DeVaughn, Aberdeen; brothers, Jackie McNeese (Liz), Quincy, Clinton “Buck” McNeese (Julia), Quincy; great-grandchildren, Preston Gray, Skyler Gray, Katie Beth Gray, Pennington Perkins, and a host of nieces and nephews; special friends, Henry Doss. In addition to his parents, he was preceded in death by his sister, Dorothy Tipton, and brother, James McNeese. Funeral Services for Robert will be held at 11AM on Wednesday, September 27, 2017, with Dr. Lloyd Sweatt officiating. Burial will be in Masonic Cemetery. Pallbearers will be Jimmy Forbus, Tommy Minich, Ronnie Ivy, Jerry Ivy, and Chad Logan. Honorary pallbearers will be Robert’s grandsons and Henry Doss. Visitation will be on Tuesday evening, September 26, 2017 from 5:00 – 8:00 P.M. at E.E. Pickle Funeral Home, Amory, MS. In lieu of flowers, donations may be made to Meadowood Baptist Church, 1512 Hatley Rd, Amory, MS 38821. Memories and condolences may be shared with his family at EEPickleFuneralHome.com.

The family of Robert R. McNeese created this Life Tributes page to make it easy to share your memories.

Send flowers to the McNeese family.