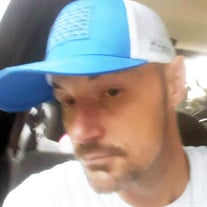 Columbus— Robbin Lynn Glover Jr., 36, passed away on Sunday, December 8, 2019 at Baptist Memorial Hospital –Golden Triangle in Columbus, Mississippi. Born in Texas on June 28, 1983, he was the son of the late Sheila Gray and Robbin Lynn Glover Sr. Robbin was a professional painter for his entire adult life. He worked mostly with his friends, Shane, Ray, and Tim. Robbin was an easy-going man with a great sense of humor. He could always make a room of people laugh. He went through hard times for a while but remained steadfast in his good natured personality. His personal motto was “It gets greater, later.” Robbin was a firm believer in God. Robbin always kept an eye on his sister, Stephanie, and his older brother, Josh. He dearly loved his family, especially his children, even when they weren’t able to stay in touch. Spending time with his family and friends brought him the greatest joy in his life. In his free time, he enjoyed listening to rap music and painting. He always tidied up any space he occupied. To know Robbin was to love Robbin. He will be missed dearly by his multitude of friends and his family. Robbin is survived by his daughter, Sheila Ann Glover, of Brooksville; sons, Robbin Lynn Glover III, Hunter Ryan Turnage, both of Brooksville; sister, Stephanie Glover Herring (Devin), Columbus; brother, Joshua Honnoll (Cindy), Memphis, TN; grandmother, Emma Gray, Columbus; nephew, Jonathan Honnoll, Memphis; and mother of his children, Jennifer Glover, Brooksville. In addition to his parents, he was preceded in death by his grandparents, Alfred Gray, Robert and Sylvia Glover. A private family gathering will be held at a later date. Memories and condolences may be shared with his family at EEPickleFuneralHome.com

Columbus&#8212; Robbin Lynn Glover Jr., 36, passed away on Sunday, December 8, 2019 at Baptist Memorial Hospital &#8211;Golden Triangle in Columbus, Mississippi. Born in Texas on June 28, 1983, he was the son of the late Sheila Gray and Robbin... View Obituary & Service Information

The family of Robbin Glover, Jr. created this Life Tributes page to make it easy to share your memories.