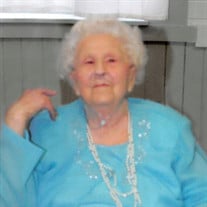 Mrs. Robbie Lee Gregory Garner, 90, passed away on Tuesday, October 11, 2017 at Oak Tree Manor in Amory, Mississippi. Born on January 19, 1927 in Detroit, Alabama she was a daughter to the late Eddie Hay and Cleta Bell Gregory. She attended school in Detroit, Alabama and was a member of Grady’s Chapel United Methodist Church for over 30 years. Robbie married the love of her life, Albert Garner on December 23, 1949. Together, they were blessed with 1 son, Terry. Robbie was employed for 50 years by Amory Garment Company where she was a seamstress. She also worked at one of her closest friends’ restaurant, the Fish House when it was on Cotton Gin Hill. When the restaurant moved to its present location, she continued to enjoy time with “Ma Bill” and family at Bill & Jim’s Friendship House. Robbie was a very special southern lady. She was constantly smiling and happy. She was especially close to Evelyn Keeton, Willie Lois (Ma Bill) Miles, and her sister-in-law, Elizabeth Garner. She loved to go camping and fishing. To ask if she had a favorite fish to catch, all she said that she would catch any fish that bit her hook. In her spare time, Robbie listened to Elvis and Carl Perkins. One of her fondest memories was attending the Big Concert in Amory when Carl Perkins, Elvis and Johnny Cash performed. As the story goes the party continued at the Fish House on Cotton Gin Hill! Every time she told this story, she always had a twinkle in her eye. Robbie will always be remembered for her loving smile and the twinkle she always had in her eyes. In addition to her parents, she was preceded in death by her husband, Albert Garner; Step-grandchildren: Jody and Kandi Wilemon and their mother, Sandra Garner; and brothers: Eddie Ward and Ernie Gregory; several nieces and nephews. Mrs. Robbie Garner is survived by her son, Terry Wayne Garner (Chrissie), Amory; Sisters: Helen Ashcraft (Amory); Sister-in-law: Frances Gregory (Olive Branch); Brother: J.V. Gregory (Marilyn), Carthage; Multiple nieces and nephews on both sides of her family. A celebration of life service for Robbie Garner will be at 1:00 P.M., Saturday, October 14, 2017 at E.E. Pickle Funeral Home in Amory. Bro. Danny Wilburn will be officiating. Pallbearers will be Freddie Thompson, Gene Lilly, Donnie Garner, Rusty Murphree, Rex Allen Thompson, Teddie Thompson and Jesse Mills. Burial will follow in Masonic Cemetery. Visitation for Mrs. Garner will be from 5:00 – 8:00 P.M., Friday, October 13, 2017 at the funeral home. Memories and condolences may be shared with her family at EEPickleFuneralHome.com.

Mrs. Robbie Lee Gregory Garner, 90, passed away on Tuesday, October 11, 2017 at Oak Tree Manor in Amory, Mississippi. Born on January 19, 1927 in Detroit, Alabama she was a daughter to the late Eddie Hay and Cleta Bell Gregory. She attended... View Obituary & Service Information

The family of Robbie L. Garner created this Life Tributes page to make it easy to share your memories.

Send flowers to the Garner family.