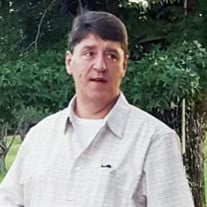 Aberdeen – Ricky DeWayne Willhite, 57, passed away on Sunday, May 23, 2021, at his residence in Aberdeen, Mississippi. Born in Amory, MS on December 8, 1963, he was a son of Gilbert Powers and the late Pauline Frederick Powers and Jack Willhite. Growing up, Ricky was blessed by God to have three brothers. Ricky graduated from Aberdeen High School. He was a selfless, caring and loving man. He was always joking and pranking with his friends and others. He liked to help others and he was always the first to forgive someone when he was wronged. A gentle spirit, he was Baptist and he believed in God. Ricky’s family meant the world to him, with his nieces and nephews having a special place in heart as he considered them his children. He enjoyed spending time with family and making special memories. He liked to listen to Tina Turner and Sam Smith. In his free time, he liked to ride all day with his family. A man with an artistic talent, he could crochet, tackle any diy project and create some amazing arts and crafts. If asked what he was most proud of, it would have been his “kids”, his nieces and nephews, and their accomplishments in life. He will be missed by his family dearly and they will cherish all the wonderful memories made through the years. Ricky is survived by his brothers, Wayne Holloway, Winfield, AL, Tim Chism (Sandi), Wren, and Ronnie Willhite, Wren, MS; father, Gilbert Powers, Aberdeen; nieces and nephews, Allen Holloway, Amory, Cassy Holloway (Cade Cook), Amory, and Lacey Willhite, Wren; great nieces and nephews, Destiny Holloway, Bailey Holloway, Cooper Holloway and Karter Hamlett; special friends, Marlayne and Carrol, Vernon, AL. He was preceded in death by his mother, Pauline Fredrick Powers; father, Jack Willhite; grandparents, A.C. and Jetti Frederick; nephews, Chandler Chism and Lance Willhite. A funeral service will be held on Wednesday, May 26, 2021, at 3:00 pm at E. E. Pickle Funeral Home in Amory, MS with Bro. Robert Earl Fowlkes officiating. Burial will follow in Tranquil Cemetery, Wren with the Pallbearers being Justin Cook, Robert Cook, Garrett Cook, and Justin Grant. Visitation for family and friends will be held at the funeral home on Wednesday from 2:30 pm until the service hour. Memories and condolences may be shared with his family at EEPickleFuneralHome.com

Aberdeen &#8211; Ricky DeWayne Willhite, 57, passed away on Sunday, May 23, 2021, at his residence in Aberdeen, Mississippi. Born in Amory, MS on December 8, 1963, he was a son of Gilbert Powers and the late Pauline Frederick Powers and Jack... View Obituary & Service Information

The family of Ricky Willhite created this Life Tributes page to make it easy to share your memories.

Send flowers to the Willhite family.