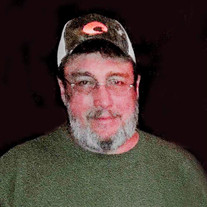 Amory - James Richard (Ricky) Higginbotham, 63, passed away on Friday, June 16, 2017, at Merit Health Gilmore Hospital. Born on September 2, 1953, in Amory, he was a son of the late James E. and Mildred Pickle Higginbotham. He was of the Methodist faith and graduated from Nettleton High School. He married Martha Lynn Armstrong on October 20, 1973. Affectionly known as “Railrider”, he worked for the BNSF railroad for 42 years. He retired on September 1, 2013. He was a founding board member of the Standifer Creek /Cross Creek Hunting Club. He served as treasurer and secretary for the hunting clubs. He was an avid supporter of the National Rifle Association. Hunting was his sport. He loved to hunt with his son and grandchildren. Ricky loved to walk his dogs and listen to them run while hunting. Ricky’s life was centered around his loving family. He loved to grill for them and loved to make memories as he spent time with his grandchildren. Before hunting season would start, Ricky would store up all kinds of snacks for those who wanted to hunt. He was known as the “Mobile Grocery Store.” His family and hunting community will miss him in that he was a generous and loving man who took care of everyone. In addition to his parents, he was preceded in death by his grandparents: James Perry and Kizzy Higginbotham and Virdo and Emma Pickle. Ricky is survived by his loving wife, Lynn; daughter, Masha Laney (Neal), Nettleton; son, Jake Higginbotham (Leah), Amory; sisters, Linda Cruber, Nettleton and Deb Nash (Bert), Smithville; grandchildren: Jacob, Sara, Easton and Riley Higginbotham, Mason and Cooper Laney; nieces and nephews: Poppy Cruber, Terry Sullivan, Cindy Sullivan, Randy Sullivan, Rusty Burroughs and Kendi Hitt. Graveside services will be at 11:00 AM on Tuesday, June 20, at Pine Grove Cemetery. Bro. Rob Sargent will be officiating. Pallbearers will be his grandchildren and Neal Laney, Michah Bauch and Jason Dean. Honorary pallbearers will be the Standifer Creek/ Cross Creek members. Visitation for Ricky Higginbotham will be from 5:00 – 8:00 PM on Monday, June 19 at E.E. Pickle Funeral Home, Amory. Memorials may be sent to LeBonheur Children’s Hospital, PO Box 41817, Memphis, TN 38174-1817. Memories and condolences may be shared with her family at EEPickleFuneralHome.com.

Amory - James Richard (Ricky) Higginbotham, 63, passed away on Friday, June 16, 2017, at Merit Health Gilmore Hospital. Born on September 2, 1953, in Amory, he was a son of the late James E. and Mildred Pickle Higginbotham. He was of the Methodist... View Obituary & Service Information

The family of Ricky Higginbotham created this Life Tributes page to make it easy to share your memories.

Send flowers to the Higginbotham family.