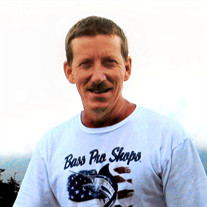 Hamilton— Richard Wayne Sutton, 52, passed away on Friday, April 26, 2019 at his residence. Born on February 21, 1967, he was a son of Charles Everett and Christine Gosa Sutton. Richard graduated from Hamilton High School with the Class of 1985. He worked with the Mississippi Department of Transportation (MDOT) for twenty-five years. During his career with MDOT, he was a supervisor over four counties and he cultivated many lifelong friendships with his crew members. Richard was a member of Bartahatchie Baptist Church. His motto was simple: “One day at a time.” Richard loved spending time outdoors, especially in the woods hunting. In his free time, he liked collecting antiques and old coins. He could often be found on the front porch talking with his buddy, Ricky Reeves. Richard was an avid fan of the Atlanta Braves and the Mississippi State Bulldogs. He also enjoyed listening to country and rock artists such as Kid Rock and ZZ Top. Most importantly, Richard enjoyed spending time his family and his grandkids. He cherished the time he spent with them and will be dearly missed. The memories he made with his family and friends will live on the hearts of his loved ones forever. In addition to his parents, Richard is survived by his wife, Tina Renae McGee Sutton, Hamilton; daughter, Kristen Hood (Shane), Aberdeen; sons, Nathaniel Sutton, Hatley, Will Helms, Hamilton; grandchildren, JonRyan, Shane, Aaron, and Bo Hood; brother, Charles A. Sutton; and nephew, Eric Sutton. In addition to his grandparents, Richard was preceded in death by Joshua Wayne Sutton and Gary Sutton. A funeral service will be held at 4PM Tuesday, April 30, 2019 at E.E. Pickle Funeral Home in Amory, with Bro. Philip Lindsey officiating. Burial will follow at Sullivan Cemetery in Caledonia, MS. Pallbearers will include Billy Ray Yarbrough, Toby Yarbrough, Ray Winders, Timmy Logan, Stephen Sutton, and Frank Young. Visitation will be from 2PM until the service hour at the funeral home. Please share your memories and condolences with his family at eepicklefuneralhome.com

Hamilton&#8212; Richard Wayne Sutton, 52, passed away on Friday, April 26, 2019 at his residence. Born on February 21, 1967, he was a son of Charles Everett and Christine Gosa Sutton. Richard graduated from Hamilton High School with the Class... View Obituary & Service Information

The family of Richard Wayne Sutton created this Life Tributes page to make it easy to share your memories.

Send flowers to the Sutton family.