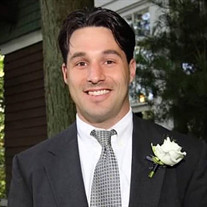 Ridgeland, MS - Richard Byron Raff, 43, passed away on Friday, January 12, 2018. Born on June 24, 1974, in Charlotte, NC, he was a son of K. Newton and Carmen Sotir Raff. Richard graduated from Dobyns Bennett High School in Kingsport. He then attended University of Tennessee for two years before graduating from the University of Mississippi with a Bachelor’s degree in Business. Richard was a very successful entrepreneur who began his career in banking and then became a broker and formed his own brokerage company. A man of many talents, Richard loved building homes for personal as well as for investments. Hobbies included playing guitar, landscaping and all things technology along with physical training and sports. His faithfulness to the Lord led him with a servant’s heart to help disaster victims, particularly Hurricane Katrina and building homes in Mexico. Richard always strived to achieve greatness in everything he did. He loved the Lord and knew him as his Savior. Richard was fearless both in sports as well as business. An active man, he found time to participate in numerous races with a goal of running a race in every state. He competed in Iron Man competitions, body building, water and snow skiing as well as shooting sports. He thrived in competition but was steadfast in his sportsmanship. His family and friends are comforted with the fact that Richard has won the ultimate victory in Christ Jesus. Richard touched many lives and his memories will be cherished forever by his family and friends. Richard is survived by his parents, K. Newton “Newt” and Carmen Sotir Raff, Piney Flats; sister, Lisa Raff Miller (Daniel Edward Miller),Signal Mountain; brother, Kenneth N. Raff II (Adrienne Chafin Raff), Johnson City; nieces and nephews, Kenneth Newton Raff, III, Kendall Marie Raff, Isaac Waylon Raff, William Edward Miller, and Ethan James Miller. His memorial service will be held at 6PM, Friday, January 26, 2017, at Grace Fellowship Church, Johnson City, TN, with Pastor Tom Oyler officiating. Visitation for Richard will be from 4-5:50 PM at the church. His family requests donations to The Salvation Army, PO Box 1715, Johnson City, TN 37605. Winter clothing donations in Richard Raff's name (coats, hats, gloves) should be taken to the memorial service and placed in the drop box or taken directly to The Salvation Army, 204 W. Walnut St., Johnson City 37604. Memories and condolences may be shared with his family at eepicklefuneralhome.com

Ridgeland, MS - Richard Byron Raff, 43, passed away on Friday, January 12, 2018. Born on June 24, 1974, in Charlotte, NC, he was a son of K. Newton and Carmen Sotir Raff. Richard graduated from Dobyns Bennett High School in Kingsport. He then... View Obituary & Service Information

The family of Richard Byron Raff created this Life Tributes page to make it easy to share your memories.

Send flowers to the Raff family.