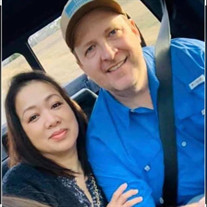 Shannon – Richard Eugene Buckner, passed away on May 31, 2020, in Atlanta, Georgia. Born on May 16, 1970, in Amory, MS, he was a son of Paul David Buckner, Jr. and the late Lancy Sue Gray. Richard attended Aberdeen Elementary, Aberdeen Middle School, and he graduated from Hatley High School. Growing up, he was one of three boys and a sister, and he learned to appreciate the importance of family. He was Christian who loved God and his family more than anything. He married to Hong “Rose” Buckner on August 26, 1989 and together they were blessed by God with three beautiful daughters. A great provider, Richard was an entrepreneur who, along with his wife, started and ran a successful business, Star Nails Salon in Tupelo. Daily they served the public by not only making them beautiful on the outside but also by making them feel special on the inside. Richard was proud of his business and the fine work that they did for their customers. He loved to write, was an Author, and he was proud to have published a book. He and his family had great work ethics and they touched many lives through their business. In his free time, he liked to fish, write, play video games, reading, debating, and politics. Richard liked 80’s rock music, disco, Johnny Cash and any type of music that brought a smile to his face. He also liked looking at different types of cars. Richard cherished when he could play and spend time with “Pookie”, “Big’un”, and “Buddy” (his grandkids). A great supporter, he encouraged students in their endeavors to better themselves in life. Richard had a huge heart and his legacy of love will live on in the hearts of his family and friends. The many memories made with him will be cherished. He will be dearly missed. Richard was survived by his wife, Hong “Rose” Buckner, Shannon; three daughters, Suelynn Parker (Corey), Rathdrum, Idaho, Starlynn Merrell (Devon), Hinesville, GA, and Shaelynn Buckner, Shannon, MS; his father, Paul David Buckner, Jr., Smithville; grandchildren, Evangelia Groves, Serenity Merrell, and David Elan Parker; brothers, Adam Buckner, Paul Buckner, Camron Buckner, and Dustin Buckner; mother-in-law, Thuy Thi Nguyen, Shannon; nieces and nephews, Lisa Brackeen, Keven Duong, Nathan Duong, Paul Buckner, Timothy Buckner, Braxton “Samson” Buckner, Sommer Buckner, Damyen Rodriguez. In addition to his mother, Lancy Sue Buckner, he was preceded in death by his sister Kayla Buckner. A private family funeral service dedicated to the memory of both Richard Buckner and his wife, Hong, will be held on Tuesday, June 9, 2020, at E. E. Pickle Funeral Home in Amory with Bro. Greg Malone and Father Joseph Le officiating. Pallbearers will be Devon Merrell, Samson Buckner, Camron Buckner, Timothy Buckner, Paul Buckner, and Alex Ruff. Public visitation for family and friends will be held on Tuesday, from 2:00 pm until 3:00 pm, on June 9, 2020 at the funeral home, in Amory.

Shannon &#8211; Richard Eugene Buckner, passed away on May 31, 2020, in Atlanta, Georgia. Born on May 16, 1970, in Amory, MS, he was a son of Paul David Buckner, Jr. and the late Lancy Sue Gray. Richard attended Aberdeen Elementary, Aberdeen... View Obituary & Service Information

The family of Richard Eugene Buckner created this Life Tributes page to make it easy to share your memories.

Send flowers to the Buckner family.