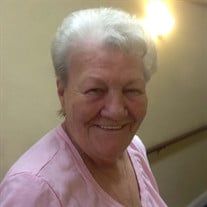 Amory – Reba Joyce Hall Colburn, 75, passed away on Sunday, July 9, 2017, at Oak Tree Manor. Born on July 15, 1941, in Greenwood Springs, MS, she was a daughter of the late Jasper Newton and Alice Elizabeth Moton Hall. Reba attended school at Greenwood Springs School, where she played basketball. During her career, she worked at Glenn’s Manufacturing as a seamstress and also in child care services. She enjoyed sitting with the elderly. Reba loved the Lord and was of the Pentecostal faith. She had a youthful heart and loved everyone she met. Reba enjoyed taking care of her family and checking on everyone. In her free time, she liked to go shopping with her family and friends and go out to dinner. She especially enjoyed cooking and is known for her delicious dressing and dumplings. The most important things in Reba’s life were her Lord and her family. She influenced and touched the lives of many people and considered her role in her family the most important in her life. Survivors include daughter, Patricia Frederick, Smithville; son, Ronnie Colburn (Tracy), Smithville; grandchildren, Chad Hill (Lee), Jason Law (Brandi), Dylan Colburn; sister, Linda Howard (Palmer), Smithville; brothers, Howard, Cleve (Dorothy), James (Eudell), & Charles Hall; sister-in-law, Belinda Hall; great-grandchildren, Anthony Hill (Catherine); Alex Hill; a host of nieces and nephews; many friends. In addition to her parents, she is preceded in death by her husband, Eugene; infant son, Rickey David Hall; brothers, Wayne Hall, Fred Hall and his wife Julia; sister-in-law, Betty Ann Hall. Her Funeral Service will be at 2 PM, Thursday, July 13 at E.E. Pickle Funeral Home, Amory, with Bro. Stanley Blaylock and Bro. Malcolm Tidwell officiating. Burial will be in Baker Cemetery in Greenwood Springs. Pallbearers will be Chris Clark, Rodney Lindsey, Larry Colburn, John McDonald, Jimmy McDonald, Nathan McLevain, and Chad Brown. Visitation will be from 5 - 8 PM, Wednesday, at the funeral home in Amory. Memories and condolences may be shared with her family at EEPickleFuneralHome.com

The family of Reba Colburn created this Life Tributes page to make it easy to share your memories.

Send flowers to the Colburn family.