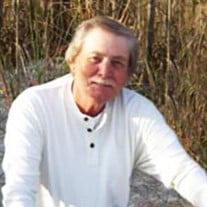 Grady Ray Keeton, 70, gained his heavenly wings on Tuesday, January 19, 2021. Born on January 21, 1950, in Amory, he was the son of the late Grady Pearson and Fannie Bell Dowdle Billingsley. Ray grew up in Monroe County and he attended both Hatley High School and Amory High School. He began working in the local furniture industry at both Value Line and Penthouse Furniture, where he was a supervisor over the frame department. Eventually he began a career with the Amory School District, where he worked as a custodian until his retirement in 2015. Ray was outgoing, dependable, and a caring man who never met a stranger. He made many friends throughout his years of employment and he was a good friend to all. He met the love of his life, Glenda and they were married on February 22, 1980. Together they were blessed with a large family, loving children, and wonderful grandchildren. Ray was a great provider and his family meant the world to him. His grandchildren were extra special to him yet his son, Jason was the light of his life. He was proud of Jason and his many accomplishments in life and the fine man he has become. Ray was a member of Trace Road Baptist Church where he was a great example of a Christian man. He was passionate about children with disabilities, he was compassionate, and he was an active member of the Masonic Lodge in Amory. In his down time, Ray loved all things outdoors as well as animals. He loved to fish and hunt in his younger days and enjoyed working in his garden. In the past couple of years he loved spending time with his four-legged best friend, Buzz. Some of his friends, with whom he solved all problems, included Charlie Lewellen, Brian jones, and Andy Cantrell. He liked to listen to Country, Gospel, and especially anything Elvis. If you didn’t watch Ray, you might get caught off guard because he was a real jokester at times. There will never be another Ray and he will be missed dearly. The legacy of Ray will live on in the hearts of his family and friends. They are comforted knowing he is with God forever. Left behind to treasure his memories, are his wife, Glenda Powell Keeton, Amory; sons, Jason Keeton, Amory, Bradley Parham, (Katherine), Amory, Michael Parham (Kim), Florence, AL; grandchildren, Ethan Bickerstaff, Smyrna, TN, Ryan Parham, Charlotte, C, Ashlee Parham, Amory, and Allison Parham, Amory; sister, Barbara Ann Bowen, Wellington,Fl.; and nieces Michella Levy and Tammy Bowen, Wellington, FL; sisters-in-laws, Donna Powell (Lisa), Columbus, MS, Diane Murray (Wade), Smithville, MS. In addition to his parents, he was preceded in death by his nephew, Fred Bowen, Jr.; his in-laws, Floyd and Marie Powell. A graveside Funeral Service will be held on Saturday, January 23, 2021, at 2:00 pm at Haughton Memorial Park Cemetery in Amory, MS with Dr. Allen Simpson officiating. Pallbearers will be his family and friends. Visitation for family and friends will be held from 12:30 pm until 1:40 pm, on Saturday, January 23, 2021 at E. E. Pickle Funeral Home in Amory, MS Please share your condolences and memories with his family at eepicklefuenralhome.com

Grady Ray Keeton, 70, gained his heavenly wings on Tuesday, January 19, 2021. Born on January 21, 1950, in Amory, he was the son of the late Grady Pearson and Fannie Bell Dowdle Billingsley. Ray grew up in Monroe County and he attended both... View Obituary & Service Information

The family of Ray Keeton created this Life Tributes page to make it easy to share your memories.

Send flowers to the Keeton family.