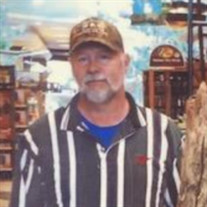 Aberdeen – Randal “Randy” Keith Stripling, 54, passed away on October 12, 2021, at his residence in Aberdeen, MS. Born on August 25, 1967, he was a son to the late Floyd Stripling and Lavern Sanders Stripling. Randal grew up in Lamar County Alabama and attended Mill Port High School. He was a hard worker and was employed for over 14 years with East Mississippi Lumber Company where he was a loader and delivery person. One of his closest friends were Barrett Baggett and they worked together for years. Randy was a good provider for his family whom he loved dearly. He was blessed by God with three sons and he was proud of them. Randy was Baptist and he lived out his faith by caring for others. He believed in God and always brought joy to a room, especially when he would tell jokes. Another close friend was Mary Waldrip, with whom he danced and enjoyed many special outing with. In his free time, he liked to be outdoors, be with his sons, rest, and listen to Country music like Merle Haggard and George Jones. He was a loving person who took good care of his children and grandchildren. So many great memories made through the years will be cherished by his sons and grandchildren. Randy will be missed dearly and will never be forgotten. He is survived by his sons, Floyd Keith Stripling (fiance’ Ashley), Amory, Jonathan Keith Stripling, Pontotoc, and Dale Keith Stripling (fiance’ Brittany); grandchildren, Sadie Stripling, Grayson Stripling, Sophie Stripling, and Preston Stripling; sister, Debra Hudson (Randy), Millport, AL; brothers, Tim Stripling, SC, Ricky Stripling, and Gary Stripling, Millport, AL. He was preceded in death by his parents. A Memorial Service for Randy will be held on Saturday, October 23, 2021 at 2:00 PM, at Pleasant Hill Cemetery, in Columbus, MS. Memories and condolences may be shared with his family at EEPickleFuneralHome.com.

The family of Randall "Randy" Stripling created this Life Tributes page to make it easy to share your memories.

Send flowers to the Stripling family.