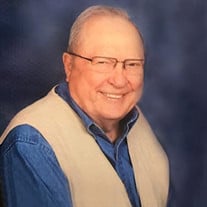 Amory - Ralph Salter, 87, with his family surrounding, departed his earthly home on January 25, 2020. He was born on August 27, 1932, in his home, in Elmore County, Alabama, to the late John Philip and Ila Mae Garner Salter. Ralph grew up in Goodwater, Alabama, played sports in High School, and graduated with the Class of 1950. He received a degree in business Administration from Auburn University in 1954. Upon graduation and as a condition of being in the ROTC program, he was commissioned as a 2nd Lt., entered the U.S. Army and was assigned to Germany as a member of the US Army of Occupation. After completing his military obligation, he attended The University of Alabama where he obtained his MBA degree in Industrial Accounting. He joined a public accounting firm where he remained for eight years, during which time he obtained his CPA license. He married his soul mate for life, Mary Frances Bostic, on October 15, 1960. He rejoined the military by joining the Mississippi Army National Guard. In 1967, he and his family relocated to Amory when he accepted the position of Comptroller for Amory Garment. Ralph was eventually promoted to President of Amory Garment, and retired after 32 years in 2000. He also served for many years with the US Army National Guard. During his military career, he held the position of Battalion Commander and retired with the rank of Colonel in 1982. Family and God meant everything to Ralph. A man who loved the Lord, Ralph was a long time member of St. Andrews United Methodist Church. He served as Treasurer for many years, and held numerous committee and council leadership positions during that time. He loved his church family and tried to exemplify Christ in his actions. Ralph was a very active man. He was a proud member of the American Legion, an alumni for Auburn and Univ. of Alabama, a member of MS NE Army Association, a member of the Mississippi Society for CPAs, and a Life Member Military Officers Association. He had a strong sense of responsibility, and believed that members of a community must take seriously the responsibility of making the community better. To that end, he joined the Amory Food Pantry upon retirement, where he served tirelessly for as long as he was able. He was also an active member of the Kiwanis Club for over 40 years. In his free time, he loved to listen to 50’s music, classical music and Big Band music. He enjoyed watching Auburn and Alabama football as well as cheering on the Amory Panthers Football and Band members. His family is eternally grateful for the love and support he provided as husband and father throughout the years. He was the cornerstone for his family, and taught his children by both word and deed. His friends and community grieve as they have lost a fine man, yet the impact he has had on them will last for generations. He will be missed greatly. Ralph is survived by his loving wife, Mary Francis, Amory; daughters, Karen Dixon (Mark), Tupelo, Kim Langley (Marty), Nettleton; sons, Stephen Salter, Auburn, Michael Salter (Raquel), Jacksonville, FL; grandchildren, Kenzie and Luke Dixon; Abby Langley; sister and brother-in-law, Betty and Tommy Carr, Tupelo; nieces and nephews, Ann Davis, Martha Harrelson, John Gilliland, Edward Gilliland, Larry Carr, Tommy Carr, Cecilia Spencer. In addition to his parents, he was preceded in death by his sister, Elizabeth Salter Gilliland. His funeral service will be held on Wednesday, January 29, 2020 at 2:00 pm at St. Andrews United Methodist Church, Amory, MS, with Rev. Brian Gordon officiating. Burial will follow in Haughton Memorial Park, Amory, MS. Pallbearers will be David Seay, Anthony Pearson, Jimmy Glenn, Bill Griffith, Buddy Carlisle, Rick Stanford, Rick Gault, Tim Stark, and Edd Finley. Honorary Pallbearers will be the members of St. Andrews Congregation, Members of 1/198th Armor, and Amory Garment employees. Visitation will be on Tuesday evening, January 28, 2020 from 5:00 pm until 8:00 pm, at the funeral home in Amory. Donations in lieu of flowers may be made to St. Andrews United Methodist Church or the Amory Food Pantry. Memories and condolences may be shared with his family at eepicklefuneralhome.com.

Amory - Ralph Salter, 87, with his family surrounding, departed his earthly home on January 25, 2020. He was born on August 27, 1932, in his home, in Elmore County, Alabama, to the late John Philip and Ila Mae Garner Salter. Ralph grew up... View Obituary & Service Information

The family of Ralph Salter, Colonel, US Army (Ret) created this Life Tributes page to make it easy to share your memories.

Send flowers to the Salter, Colonel, US Army (Ret) family.