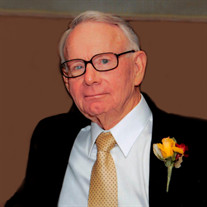 Ragan Fikes, 89, passed away on Tuesday, August 22, 2017, at NMMC, Tupelo. Born on April 22, 1928, in Hamilton, AL, he was a son of the late Louis Roy and Mary Louis Goodson Fikes. Ragan graduated from Hamilton (AL) High School and attended Jacksonville State Teachers’ College. He was a man who never shied away from hard work and had a wide range of work experiences in his lifetime. Ragan worked for Kaiser Frazer Corporation, California Eastern Airways, City Tire, and was co-owner of Hathcote, Fikes and Lee Contractors. On December 4, 1961, he began work at Security Bank in Amory and retired as executive vice-president on April 30, 1993. While working at the bank, Ragan was also co-owner of F & D Farms, where he raised purebred hogs. After retirement, Frank Comer and he worked together in real estate. Ragan was honored to serve on the Board of Aldermen for the City of Amory for 16 years. He enjoyed his 26 years as a member of the Housing Authority Board as well, and he was also a member of the Advisory Board of the Community Bank. Spending time with family and travel were two things that brought him the most joy. For many years, Ragan loved the time that Joyce and he spent at Pickwick with Ruth and Doug Young and Frank and Thera Comer. Nothing was as relaxing as time out on the boat. He enjoyed fishing and passed that love down to several family members as well. Ragan and Joyce visited all 50 states, many of those with his brother and sister-in-law, Willie and Elaine Fikes. Once his travelling days were over, he enjoyed sitting in his recliner, looking at maps, and talking about his travels. Ragan and Joyce were also fortunate to travel to Europe several times, and he always said Switzerland was his favorite country they visited. Ragan liked to listen to classic country, bluegrass, and Southern gospel music and kept a radio playing wherever he was working. He enjoyed going to the Grand Ole Opry and especially enjoyed listening to George Jones (“he can bring tears to a glass eye”) and Dolly Parton. Playing a guitar and listening to others play brought him joy as he had been born into a musical family. He also enjoyed making things with his hands. For many years, he spent hours in his workshop making lovely furniture and then birdhouses. A self-taught craftsman, he also learned to make wind chimes out of unusual items that make beautiful sounds together. Ragan had a green thumb and for many years provided vegetables for family and friends out of his ever expanding garden. With all of the accomplishments of his life, he was most proud of his three daughters. Anyone who ever talked to Ragan Fikes for very long heard him say that the most important thing in this life is a person’s relationship with Jesus Christ. That relationship was, above all else, the overall guiding light in his life which is of great comfort for those who loved him. He is survived by his wife of nearly 69 years, Joyce Harris Fikes, Amory; daughters, Pam F. Berry (Ritchie), Brandon; Vicki Turman (Johnny Frank), Amory; Beth Fikes Mitchell (Steve), Pontotoc; sisters-in-law, Willie Fikes, Lenora “Lynn” Fikes, and Laura Jean Fikes of Hamilton, AL; and Wauneace Fikes, Red Bay; grandchildren, Della Sellers (Stephen), Jonathan Ragan Berry (Lisa), Elizabeth Coleman (Kem), Ginny Claire Turman, Jeb Millender, Elizabeth Anne Mitchell; 6 great-grandchildren; several nieces and nephews; and special friends, Kammie and Mike Miller and Visiting Angels, especially Louise Buchanan and Christine Walker. In addition to his parents, he was preceded in death by 4 sisters and 7 brothers and numerous special friends. His Funeral Service will be at 1 PM, Saturday, August 26 at First Baptist Church, Amory, with Dr. Allen Simpson and Bro. Tim Harris officiating. Burial will follow in Masonic Cemetery. Pallbearers will be Jonathan Berry, Jeb Millender, Stephen Sellers, Ronnie Duke, Terry Duke, Jeffrey Fikes, John Fikes, and Tommy Gann. Honorary pallbearers will be Bud Harlow, Benny Wright, Tommy Cole, Tommy Fikes, Louis Duke, Jason Gallop, Lewis Hathcote, Larry Goudelock, and former employees of Security Bank. Memorials may be given to Alzheimer's Association National Office for Research, 225 N. Michigan Ave., FL. 17 Chicago, IL 60601 or Toccoa Falls College, 107 Kincaid Drive, Toccoa Falls, GA 30598 Memories and condolences may be shared with his family at EEPickleFuneralHome.com.

Ragan Fikes, 89, passed away on Tuesday, August 22, 2017, at NMMC, Tupelo. Born on April 22, 1928, in Hamilton, AL, he was a son of the late Louis Roy and Mary Louis Goodson Fikes. Ragan graduated from Hamilton (AL) High School and attended... View Obituary & Service Information

The family of Ragan Fikes created this Life Tributes page to make it easy to share your memories.

Send flowers to the Fikes family.