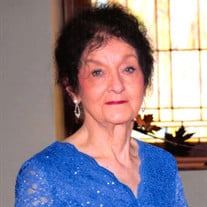 Amory—Peggy Black Wilkerson, 79, died on Friday, August 16, 2019, at the Regional One Medical Center in Memphis, TN. Peggy was born on September 25, 1939, to Boyd and Bernice Black. She graduated from Greenwood Springs High School, Class of 1957. She married Eddie L. Wilkerson on October 28, 1958. They were blessed with three children. Peggy was employed at Gilmore Memorial Hospital for several years. Upon Eddie’s death in 1998, she left her employment at the hospital to manage the family business, Wilkerson Appliance. She managed the business until her retirement in October, 2018. She also served as Ward 4 Alderman for the City of Amory from 1998-2009. During her years in office, she was instrumental in obtaining the weather alert system and the Veterans Memorial Monument for the City of Amory. She made many friends working with the public over the years. She always enjoyed talking to and visiting with her customers. Peggy also enjoyed playing Bridge and had played in the same Bridge Club for over 50 years. She was a member of First United Methodist Church in Amory. Peggy is survived by her daughter, Jolayne Parchman (Jim), and sons, Larry Wilkerson (Dina) and Tommy Wilkerson (Christi), all of Amory; her dearly beloved grandchildren, Hannah Edwards (Drew), Isaac Parchman, Jake Wilkerson, Sam Wilkerson, all of Amory; Joe and Sara Wilkerson of Greenville, MS; one great-grandchild, Henley Edwards. She was preceded in death by her parents and her husband, Eddie. Graveside services will be held at 1:00 PM, Tuesday, August 20, 2019 at Amory Historical Cemetery with Rev. Wesley Pepper officiating. Pallbearers will be her grandsons. Visitation will be from 11 AM – 12:45 PM, Tuesday, at the funeral home. In lieu of flowers, the family requests that donations be made to the Shriners Hospitals for Children—Cincinnati Burn Unit, 3229 Burnet Avenue, Cincinnati, Ohio 48229. Memories and condolences may be shared with her family at EEPickleFuneralHome.com

The family of Peggy B. Wilkerson created this Life Tributes page to make it easy to share your memories.

Send flowers to the Wilkerson family.