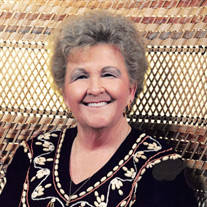 Smithville – Peggy Jo Sanderson, 83, started her new life in Heaven on April 24, 2021. Born on July 14, 1937, in Smithville, MS, she was a daughter of the late Bascom Brasfield and Jettie Gregory Brasfield. Peggy graduated from Smithville High School, was a true Seminole at heart, and she lived her whole life in Smithville. A woman with great work ethic, she initially worked at Monroe Trousers in Smithville. She became an LPN, enjoyed her work so much that she went on to further her education at Miss University for Women where she obtained a Nursing Degree. Peggy became a Registered Nurse and was passionate about her patients and giving them the best care. During her 30 year career, she touched many lives and earned “Nurse of the Year” at Gilmore Memorial Hospital. God blessed Peggy with a loving husband, Robert Sanderson, whom she married on June 14, 1958. Together, God gave them three children, 7 grandchildren, and 13 great-grandchildren whom she loved dearly. Peggy loved God and was Baptist. She was always putting everyone before herself and she didn’t mind being in charge to make sure things ran smooth in life. She had a selfless heart and she liked to fix everything and help everyone. Always joking around, Peggy liked to pick on folks and hang out with family or her co-workers while they went on vacation or camping. Some of her favorite vacation spots were Gulf Shores, the Smokey Mountains, and a one memorable trip to Europe. She also liked to go dancing, watch basketball, listen to country music, and grow flowers in her gardens. Often she would collect treasures like Fenton Glass and Hummel figurines. Peggy was kind giving spirit who will be missed dearly. The memories made with her family and friends, through the years, will be cherished forever. She is survived by her husband, Robert Lewis Sanderson, Smithville; sons, Lynn Sanderson (Kim), Smithville, Greg Sanderson (Teresa), Smithville; grandchildren, Jesse Sanderson, Starr Sanderson Perry, Bobby Sanderson, David Streets, Beth Streets Kroener, Jacob Robinson, and Julia Robinson; great-grandchildren, Emery Sanderson, Lynsey Bray, Jordan Bray; Trent, Sam, Arlee, and Iris Sanderson; Nathan and Maddy Duncan; Anastasia Kroener; Anna, Hayden, and Kayden Streets. In addition to her parents, she was preceded in death by her son, Gary Sanderson; brothers, Tommie Brasfield and Jerry Brasfield. A Celebration of Life service will be held on Thursday, April 29, 2021, at 2:00 pm, at E. E. Pickle Funeral Home in Amory, with Bro. Kelvin Price officiating. Burial will follow in Pierce Chapel Cemetery, Smithville, with Pallbearers being Jesse Sanderson, Bobby Sanderson, David Streets, Patrick Perry, Jeff Kroener, and Jacob Robinson. Honorary Pallbearer will be Mark Lee. Visitation for friends will take place on Wednesday, April 28, 2021 at the Funeral Home from 5:00 pm until 7:00 pm. Memories and condolences may be shared with her family at EEPickleFuneralHome.com.

Smithville &#8211; Peggy Jo Sanderson, 83, started her new life in Heaven on April 24, 2021. Born on July 14, 1937, in Smithville, MS, she was a daughter of the late Bascom Brasfield and Jettie Gregory Brasfield. Peggy graduated from Smithville... View Obituary & Service Information

The family of Peggy Jo Sanderson created this Life Tributes page to make it easy to share your memories.

Send flowers to the Sanderson family.