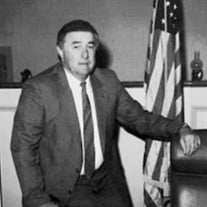 Linzy Franklin “Pat” Patterson Amory – Pat Patterson, 82, finished a good fight and ultimately won the battle when he saw Jesus face to face on Friday, January 15, 2021. He was born on September 21, 1938, to Lula Preston and Ruby Mae Jones Patterson, in the Peaceful Valley Community, Mississippi. Growing up in a large family, with seven siblings, Pat understood what it meant to work hard, be selfless, and get along with others. He had five sisters, so he and his one brother were basically raised by them. He attended school in Wren and joined the Navy at a young age. He began at the Millington Naval Base and he served the United States for four years. Missing home and family, Pat returned to Mississippi and went to work at the Monroe County Power Association. Through the years, as a county employee and line supervisor, he made many friends and became familiar with county rules and regulations. One of his close mentors, Howard Moon, taught Pat a lot about local government and the budget processes. With the encouragement of his fellow workers and colleagues, Pat decided to run for Sheriff and he won. He attended the Police Academy and for the next sixteen years the public elected him as the Monroe County Sheriff. Pat took great pride in protecting and caring for his community and he continued to do this even after retiring in 1992. Never tiring, he went back to work part time at the Amory Chip Mill. During his lifetime, he was blessed by God with a loving wife, Sylvia, and four wonderful children who meant the world to him. Pat was a member and supporter of many people and great organizations. Above all, he loved the Lord and he was a long time member of First United Methodist Church in Amory. He was a member of Masonic Lodge and volunteered at the MS Boys and Girls Ranch which later became The Palmer Home for Children. He was a fair man who treated others with respect and kindness. Pat appreciated when others worked hard and he always gave 100%. He loved visiting McDonalds and his two favorite employees were Boo and Lisa, as they saw him coming and always made him feel like family. Pat could speak to anyone, was witty at times, and often would put a little sarcasm to the test when he engaged in conversations with you. He loved inspiring others and always took time to teach and listen. Picking up his grandchildren in the afternoons gave him great joy. Always setting an example, Pat, with the help of his son, received his GED at the age of 80 and walked for his diploma at ICC. In his free time, he liked to mow Amory High School grounds and listen to country music, especially George Jones. Pat was an avid MSU fan and he especially loved Amory athletics. There was not many coons that could escape Pat and his prize hunting dog, “Thunder Road”. This dog became a world champion and Pat’s natural drive and determination paired up perfectly with Thunder Road’s talent. Above all, he liked to be with people, reliving old times and celebrating new accomplishments. His outgoing personality and attitude towards life made so many people smile through the years. He will be missed dearly yet the legacy he left behind will live on in this community and within his family and friend’s hearts. Pat’s family would like to offer a special thanks to the doctors caring for Pat as well as the Kindred Hospice Staff, especially the heaven sent Nurse, Angie Schwalenburg. Left behind to treasure his memories are his wife, Sylvia Roberts Patterson, Amory; daughters, Lisa Patterson, Memphis, Lynn Patterson, Tucson; sons, Mark Mitchell (Lindsay), Amory, Linzy Patterson (Lindsey), Amory; grandchildren, Morgan Mitchell, Walker Mitchell, Lennon Whitehead, Collins Patterson, and Harper Patterson; brother, Douglas “Pete” Patterson (Diane), Amory; several nieces and nephews. In addition to his parents, he was preceded in death by his sisters, Mary Ruth Tubb, Virginia Reich, Margaret Edge, Shirley Miller and Helen Clark. A Celebration of Life Service, with Masonic Rites, will take place on Tuesday, January 19, 2021 at 2:00 pm at First United Methodist Church in Amory with Rev. Wesley Pepper and Rev. Don McCain officiating. Burial will follow in Haughton Memorial Park Cemetery, Amory, MS with the pallbearers being Steve Hunt, Keith Shields, Dr. Eddie Yoe, Larry Tierce, Bill Caldwell, Brian Johnson, Bobby Joe Blake and Jason Sullivan. Visitation for family and friends will be on Monday evening, January 18, 2021, from 5:00 pm until 8:00 pm at First United Methodist Church in Amory. In lieu of flowers, contributions may be made to First United Methodist Church, P.O. Box 147, Amory, MS 38821. Memories and condolences may be shared with his family at EEPickleFuneralHome.com

The family of Pat Patterson created this Life Tributes page to make it easy to share your memories.

Send flowers to the Patterson family.