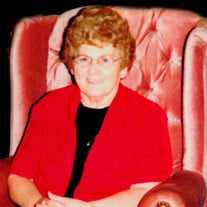 Aberdeen— Ophalia Richardson, 89, passed away on Saturday, February 2, 2019 at NMMC in Tupelo. Born in Amory on December 4, 1929, she was a daughter of Elda Brian and Annabelle Ausborn Faulkner. Ophalia attended Hatley Schools. She married her sweetheart, Sam Burle Richardson. She was blessed with a beautiful family. She was a member of Healing Waters Christian Fellowship Church in Aberdeen, and her Faith guided her throughout her life. Ophalia was a kind, humble woman who never met a stranger. She could not have been any sweeter, and was often described as a “True Southern Woman.” She loved her family and saw them through many years of making memories. In her free time, Ophalia enjoyed completing puzzles, reading books, and watching “her boys,” the Atlanta Braves, play ball. She also liked to listen to Gospel and Old Country music. Ophalia was loved by all those who met her, and never hesitated to take someone under her wing. Her family rejoices that she is in Heaven, but the cherished memories of her will never be forgotten. Ophalia is survived by her daughter, Gloria Andrews, Aberdeen; son, Jerry L. McCollum, Aberdeen; grandchildren, John Richard Taylor (Debra), Christi Leigh Sides (David), Jacob “Jake” Andrews, David Ray McCollum (Camille), Jerry “Todd” McCollum (Paula), Pamela Lynn Sanders (Scott), Stacy Jill Neal (Jimmy), Angela Gale Stevens (Brad);seventeen great-grandchildren; three great-great-grandchildren; and several nieces and nephews. In addition to her parents, she was preceded in death by her husband, Samuel Burle Richardson; two brothers; and one sister. A graveside service will be held on Wednesday, February 6, 2019 at 2PM in Hatley Cemetery. Officiates will include Pastor Brenda Harrison and Pastor Kenneth Lockhart. Pallbearers will include Phillip Faulkner, Phil Faulkner, Brian Faulkner, Robbie Cornelision, Jimmy Neal, and David Sides. Visitation will be Wednesday from 12PM-1:50PM at E.E. Pickle Funeral Home in Amory. Memories and condolences may be shared with the family at eepicklefuneralhome.com

Aberdeen&#8212; Ophalia Richardson, 89, passed away on Saturday, February 2, 2019 at NMMC in Tupelo. Born in Amory on December 4, 1929, she was a daughter of Elda Brian and Annabelle Ausborn Faulkner. Ophalia attended Hatley Schools. She married... View Obituary & Service Information

The family of Ophalia M. Richardson created this Life Tributes page to make it easy to share your memories.

Send flowers to the Richardson family.