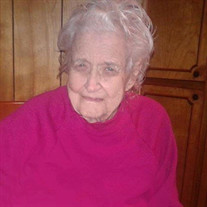 Amory – Opalean Sullivan Murphy, 99, met her Savior face to face on Sunday, September 20, 2020. Born on January 11, 1921, in Smithville, MS, she was a daughter of the late Carlos Edgar and Ovie Holloway Sullivan. Opalean grew up in Monroe County, attended Pearce Chapel School, and later she graduated from Smithville High School. When World War II began, she went to work to help her country at the Munitions Plant in Prairie, Mississippi. After the war, she went to work at Amory Garment for over 40 years. She was a hard worker and always helped take care of her family. She married the love of her life, Homer T. Murphy, and together they were blessed with a daughter, grandchildren, and great grandchildren. Opalean loved the Lord and was a member of Free Will Baptist Church in Amory. When she was in good health, she enjoyed attending church. She was also a member of the Eastern Star. In her free time, Opalean liked to quilt, sew, but most of all, she loved to grow day lilies. After retirement, she became an active member of the North Mississippi Alabama Daylilies Society. She liked to travel for club meetings and to see new varieties of daylilies. Opalean also liked to go to the coast and just spend time in her garden. She lived out her faith by serving others and her gardening talents colorfully blessed others over the years. Her family is thankful for all the many years of love and memories. She is survived by her daughter, Brenda Fears (Jerry), Amory; grandchild, Janet Stanford (Kent); great-grandchildren, Darren Kent Stanford, Jacob “Jake” Edward Stanford, Trey Murphy Stanford, Rose Lynn Stanford; and a great-great-grandson, Conner Edward Stanford; sisters, Reba Turner, and Laura Jean Wheeler; brother, James “Buddy” Sullivan; several nieces and nephews; special friends, Mildred and George Washington. In addition to her parents, she was preceded in death by her husband, Homer T. Murphy; grandchild, John Allen Fears; great-grandchild, Sarah Ashley Stanford; sisters, Vernie Sullivan, Eloise Lindsey, Mildred Culverhouse, and Hazel Noe. The family will have a private service. Donations, in memory of Opalean, may be made to St. Jude Children’s Research Hospital, St. Jude Place, Memphis, TN. Memories and condolences may be shared with her family at EEPickleFuneralHome.com

Amory &#8211; Opalean Sullivan Murphy, 99, met her Savior face to face on Sunday, September 20, 2020. Born on January 11, 1921, in Smithville, MS, she was a daughter of the late Carlos Edgar and Ovie Holloway Sullivan. Opalean grew up in... View Obituary & Service Information

The family of Opalean Murphy created this Life Tributes page to make it easy to share your memories.

Send flowers to the Murphy family.