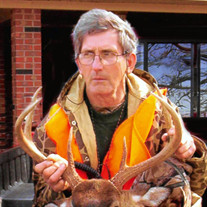 Fulton/Carolina Community – Olen Dale Cox, 72, met his Savior face to face on October 11, 2021. He was born on June 19, 1949, in the Carolina Community, to the late Eules Young Cox and Annie Phillips Cox. Dale grew up in a large family with 8 other siblings, in Itawamba County and he graduated from Fulton High School. He served this great country by enlisting in the United States Army where he obtained the rank of SP4. He was a proud patriot and loved America. After serving in the Army, he went to work at True Temper Sports, where he was employed for many years until he retired. Dale met the love of his life, Madie Louise Tubb, and they were married on August 8, 1968. Together they were blessed three children and many grandchildren and great grandchildren. His family meant the world to him. He was an amazing man, who was loving and a great Christian. His family, friends, and the community meant the world to him and he always had a kind word for others. His faith in Jesus Christ was the anchor of his joy and he lived out his faith daily through his walk and care for others. He was a member of the Evergreen Baptist church yet built a brotherhood with many Christians across the community. He loved his extended family, the church, and he proudly served as a Deacon who prayed fervently and served Christ’s church gladly. A humble man with a strong faith, Dale loved to listen to Gospel music and country music. Dale could fix anything and he used his skills to serve others in the community. If the work wasn’t precise, he would make sure it was right and often times he got called “Chief” as he was persistent in perfection. In the past, while he was able, he liked to go hunting and fishing with his numerous buddies in the surrounding area. He also loved to do carpentry work and read his Bible and other books. Those who knew and loved him have complete confidence that he is in the loving arms of God. Dale will be missed dearly yet the great legacy he left will live on in the hearts and minds of his loved ones. Left behind to treasure the memories are his loving wife, Madie Louise Cox, Fulton; daughters, Pamela Cox White (Phillip), Fulton, Amanda Dawn Witcher (Terry), Nettleton; son, Michael Dale Cox (Leslie), Quitman; grandchildren, Summer White, Abigail Smalley,Shelby Cox, William Cox, Cody Cox, Christin Stewart, Lilly Stewart, Autum Witcher, Braxton Witcher, and Dakota Witcher; great-grandchildren, James Reid Jenkins and Baylor Alexander Smalley; sisters, Barbara Hill, and Sharon Cox; brothers, Phil Cox, Tommy Cox, Billy Cox, and Gerald Cox. In addition to his parents, he was preceded in death by his brother, Ronnie Cox and Larry Cox. A Celebration of Life service will be held on Friday, October 15, 2021 at 3:00 pm at E. E. Pickle Funeral Home in Amory, MS with Bro. Bobby Robins, Bro. Mike Yielding, and Bro. Mike Todd officiating. Burial will follow in New Chapel Cemetery, Nettleton, MS. Pallbearers will be Johnny Brown, Charles Berryhill, Jody Berryhill, Larry Tubb, Pat Huddleston, and Larry Wigginton. Honorary pallbearer will be Cecil Jackson. Visitation for family and friends will be held on Thursday evening at the funeral home in Amory from 6:00 pm until 8:00 pm. The family requests that in lieu of flowers that memorials will be made to St. Jude’s Children’s Research Hospital. Memories and condolences may be shared with his family at eepicklefuneralhome.com.

The family of Olen "Dale" Cox created this Life Tributes page to make it easy to share your memories.