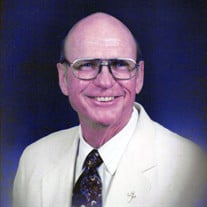 Newton Prestridge, Jr. Amory— Newton Prestridge Jr., 91, passed away peacefully on Friday, June 7, 2019, at North Mississippi Medical Center in Tupelo. Born on May 8, 1928, in Waxahachie, TX, he was a son of Newton Prestridge Sr. and Stella Escue Prestridge. Newt spent his childhood years in Texas and graduated from Waxahachie High School with the Class of 1947. He then joined the U.S. Air Force in 1948 and served honorably for seven and a half years. Newt worked all of his life, beginning at a young age in Texas. An adolescent in the aftermath of the Great Depression, he began his life with humble beginnings. While in the Air Force, Newt attended college classes to further his education and started his career in sales. Newt worked his way up to Sales Manager for the Southeast Region of the United States in Food Distribution. He eventually took a job with Mid South Packaging in Tupelo in the 1970s. Newt met the love of his life, Linda, and they married on August 5, 1979. Newt later became owner of Moore’s Meats in Smithville and operated the business for over twenty years. Throughout his life, he was an entrepreneur; but, in his later years he fell in love with carpentry and worked as a “handy-man.” Newt loved working with his hands and building things. A talented carpenter and inventor, Newt developed building material and equipment designs that he gave to Mississippi State University. Newt loved the Lord and was a faithful member of both First United Methodist Church in Amory and Smithville United Methodist Church, where he had served on the board of trustees for both churches. He was often called upon by the church to pray, serve as an usher, and lead Children’s Church. Newt happily and graciously served others, always to the best of his ability. He believed in showing by example God’s grace. Newt was never a materialistic man, and would give the shirt off his back for anyone in need. A friend to everyone he met, Newt was an honest, approachable man. He loved telling stories and captivated his audiences. He entertained his family and knew his way around the kitchen. Newt could smoke barbeque with the best of ‘em and loved making biscuits with red-eye gravy. He was always in deep thought, and always prepared. Newt was known for his kindness and generosity. He was always serving others, and actively serving the Lord. Newt’s family misses him greatly, but they have peace knowing he is in his heavenly home. The memories and lessons he shared with his family and friends will live on in the hearts of his loved ones. Newt is survived by his wife, Linda Prestridge, Amory; daughters, Dr. Vanessa Graf (George), Colorado Springs, CO; Linda Caye Durbin (Jeff), Amory; sons, Dr. Sam Prestridge (JJ), Athens, GA, Jim Eastman, Southport, NC; grandchildren, Luke Prestridge, Nathan Prestridge, Sarah Prestridge, Isabel Graf, Tatum Graf, Mandi Elam, Stacy Cox, Linda Marie Hunsucker, Matt Durbin, Brad Durbin, Justin Eastman, Cory Eastman, Trey Eastman, Amandelyn Eastman; great grandchildren, Brian Elam, Claire Nicholson, Jacob Nicholson, Kaylee Cox, Alexa Eastman; several nieces and nephews; and many beloved friends. In addition to his parents, he was preceded in death by his sisters, Christine Meier, Dorothy Maddox; brother, Sam Prestridge; daughter, Brunda Hunsucker; and son, Tommy Eastman. A funeral service will be held at Smithville United Methodist Church at 2PM, Tuesday, June 11, 2019, with Bro. Dale Whitlock and Bro. Charles Coggins officiating the service. Newt will lie in state at the church from 12PM until the service hour. Burial will follow at Haughton Memorial Park in Amory. Pallbearers will include Bobby Wilkerson, Dennis Wiginton, Donald Ray Vandiver, Randy Drake, Luke Prestridge, Nathan Prestridge, Brad Durbin, and Cory Eastman. Robert Boozer, George Hoffman, Robert Connell, and Dewey Hannon will serve as honorary pallbearers. Visitation will be from 5PM-7PM Monday night at the funeral home in Amory. In lieu of flowers, donations and memorials may be made to Habitat for Humanity at habitat.org. Memories and condolences may be shared with the family at eepicklefuneralhome.com

The family of Newt Prestridge, Jr. created this Life Tributes page to make it easy to share your memories.