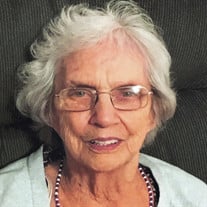 Faye “Neva” Pearson passed away on December 9, 2017 at Oaktree Manor in Amory, MS. Born on May 29, 1930 in Smithville, she was a daughter of the late Edward and Cleo Dill Wigginton. She attended Smithville Schools . Faye was a member of Bigbee Baptist Church where she served as a Sunday School teacher for years to the primary girls and boys class. She married Ernest Eugene Pearson on December 11, 1946. Prior to Mr. Pearson’s passing, they were married for 53 years and were blessed with 2 children. Faye worked in the garment industry for 50 years. She was employed at Wilson Manufacturing and retired from Amory Garment. She lived at Oaktree Manor for 5 ½ years where she was affectionately known as “Ms Neva”. There she made many friends and loved her caregivers. Mrs. Faye always had a kiss for everyone and expected a kiss from them. She loved her activity time which included bingo and penny auction. She also enjoyed singing with everyone. She never refused to sing a song when asked. First and foremost, she loved the Lord and her work in the church. Her children, grandchildren and great grandchildren were the light of her life. She will be remembered for her love of everyone. In addition to her parents, she was preceded in death by her husband, Ernest Eugene Pearson, sisters: Sue Hathcock, Marie Sanderson, Barbara Branham; brothers: James and Hubert Wigginton; and an infant brother. Faye Pearson is survived by her daughters: Linda Simmons (Jerry) Fulton, Gena Gilmore (Kenny), Amory; sister: Mildridge Kendrick (Smithville): Sisters in law: Ethel and Pam Wigginton (Smithville); Grandchildren: Lorrie Gillentine (Chris), Jay Simmons (Emily), Erin Tollison; Great-Grandchildren: Connor Tollison, Wesley and Mason Gillentine; numerous nieces and nephews. A celebration of life service for Mrs. Pearson will be at 11:00 A.M., on Tuesday, December 12, 2017 at E.E. Pickle Funeral Home Chapel in Amory. Bro Justin Haynes and Bro. Justin Simmons will be officiating. Burial will follow in Liberty Cemetery. Pallbearers will be Bill Tacker, Charley Branham, Robert Culpepper, James Taylor, Connor Tollison, Wesley Gillentine, Mason Gillentine. Honorary Pallbearers will be the employees of Oaktree Manor and employees of Legacy Hospice. In lieu of flowers, memorials may be given to Bigbee Baptist Church Building Fund, P.O. Box 768, Amory, MS Visitation for Mrs. Pearson will be on Monday evening, December 11 from 5-8 PM at the funeral home.

Faye &#8220;Neva&#8221; Pearson passed away on December 9, 2017 at Oaktree Manor in Amory, MS. Born on May 29, 1930 in Smithville, she was a daughter of the late Edward and Cleo Dill Wigginton. She attended Smithville Schools . Faye was a member... View Obituary & Service Information

The family of Neva Pearson created this Life Tributes page to make it easy to share your memories.

Send flowers to the Pearson family.