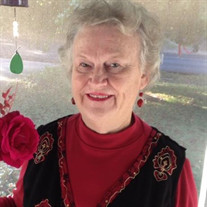 Nancy Sloan Atkins Columbus— Nancy Eileen Sloan Atkins , 74, passed away surrounded by her loving family, on Tuesday, March 26, 2019, at North Mississippi Medical Center in Tupelo, MS. Born in Hamilton, MS on July 5, 1944, she was the daughter of Johnnie Ridings Sloan and Troy Newton Sloan. Nancy professed her faith in Christ on March 22, 1959 and she loved the Lord with a bold faith. She was a graduate of S. D. Lee High School Class of 1965. Nancy married Joseph “Ellis” Atkins on June 11, 1967 and they were blessed with one daughter and three sons. She was a strong Christian who quoted scripture often. She was a former member of the Bread of Life Church in Columbus where she played the piano and sang. She truly “Walked the Walk” by being a powerful prayer warrior and one who read her Bible often. Nancy’s family was her priority and she worked primarily in the home guiding their large family in day to day activities. She also worked in the public. She initially worked in 1965 at Bellas Hess, then at Woolco from 1965-1969. She then became an Assistant Teacher at Franklin Academy from 1983-1984 and worked with children that had reading disabilities. She was a caring lady who reached out to others sharing her beautiful smile and a word of encouragement. She enjoyed spending time with her grandchildren, by going to the park and playing cards and board games. She loved to cook for her large family especially preparing meals on birthdays. She was a caregiver to both of her parents. She was a member of the DAR, and contributed to the Agape Ministry with the Walk to Emmaus. In her free time, she liked singing, writing poems, doing Arts & Crafts, Cross-Stitching, and playing the piano and guitar. She leaves a legacy of love behind for others to cherish forever. She will be remembered and dearly missed by her loved ones. Nancy is survived by her husband, Joseph “Ellis” Atkins of Columbus; daughter, Jennifer Lea Green (Chris), Mooreville ; sons, Joseph Heath “Joey” Atkins (Kate), Caledonia, Andrew Sloan Atkins (Lisa), Columbus, and Matthew Shelton Atkins (Danielle), Northport, AL; grandchildren, Sloan Ian Atkins, Justin Nicholas Green, Lauren Olivia Green, Rebecca Kate Atkins, and Riley Eileen Atkins; sisters, Joan Fenwick, Bloomington, IN and Acel Sloan Stallings (Jim), Hatley; brothers, John Renay Sloan, Columbus, Lee Jerome Sloan, Columbus and several nieces and nephews. She was preceded in death by her parents, Johnnie Ridings Sloan and Troy Newton Sloan; and her brother, Billy James Sloan. Graveside service will be held at 1:30 PM on Saturday, March 30, 2019, at Carolina Cemetery in the Carolina Community. Pallbearers will include Sloan Atkins, Justin Green, Chris Green, Joey Atkins, Andy Atkins and Matt Atkins. Honorary Pallbearers will be Jeremy Fenwick, Ben Fenwick and Jason Stallings. Visitation for family and friends will be from 11AM until 12:50 PM at E. E. Pickle Funeral Home in Amory. Donations may be made to the Auburn BC Meal Ministry c/o Auburn Baptist Church, 1138 Road 931, Tupelo, MS 38804. Memories and condolences may be shared with the family at eepicklefuneralhome.com

The family of Nancy Sloan Atkins created this Life Tributes page to make it easy to share your memories.

Send flowers to the Atkins family.