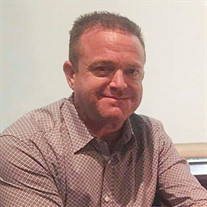 Tupelo— Michael Howell “Mike” Tubb, 48, passed away on Friday, January 4, 2019 in Tupelo. He was born on May 28, 1970 in Fort Bragg, NC to the late Albert Howell Tubb and Carolyn Speakes Gese. Mike graduated from Amory High School with the Class of 1988. He played trumpet in high school band and during his attendance at Itawamba Community College. At ICC, he was also a member of Kaleidoscope. Mike obtained a Bachelor’s degree in Industrial Technology from Mississippi State University in 1993. Throughout his career, he worked for Swift Staffing and ran a department for Cooper Tire. Mike was an assistant HR and Plant Manager for Ceco Building Systems in Columbus. He was a former member of Mississippi Manufacturers Association, as well as an honorary member of Columbus Air Force Base. Mike, affectionately known as “Lub-Dub,” was a charismatic, fun-loving goofball who never met a stranger. He made numerous close friends who loved him dearly. Mike loved spending time with his family, especially his children. He was raised a Southern Baptist and was a member of Sound the Trumpet Ministries. Mike was an avid MSU sports fan and enjoyed the camaraderie of fans cheering on their team together. He was a lover of music, especially 80’s music and Classic Rock. Additionally, he loved cooking, mainly anything on the grill. In his free time, he enjoyed fishing, golf, and tinkering on old cars. Mike was larger than life; he could make anyone laugh and would give a stranger the shirt off his back. He impacted many lives and leaves behind many memories to be cherished. His family takes comfort in knowing their Lub-Dub is resting peacefully with his maker in Heaven. Mike is survived by his daughter, Alicia Tubb Johnson (Ben), Tupelo; son, Nicholas “Nick” Tubb, Tupelo; step-daughter, Rayvn Camp, Tupelo; granddaughter, Swayze Rose Johnson; sister, Caryn Bivens (Stephen), Columbus; niece, Paige Bivens; uncle, Gary Barnett; cousins, James Barnett (Beth), Lori Barnett Moody (William); and friend, Janet Fannin Tubb, Tupelo. In addition to his parents and his father-in-law, Joe Fannin, Mike was preceded in death by his grandparents, Jim and Maxine Howell Tubb; and aunt, Jimmie Barnett. A memorial service will be held at 1PM Saturday, January 12, 2019 at E.E. Pickle Funeral Home in Amory, with Pastor Neal Avery officiating. Burial will follow at Howell Cemetery in Athens. The “Lub-Dub Line” of pallbearers will include Jimmy Wiygul, Tony White, Luke Tentoni, Sean Thompson, Ron Gann, Bill Moody, Bill McCarty, Sam Griffie, James Thomas, Mike D. Williamson, Joey Pounders, Richard Passmore, Ron Robinson, Jason Cross, Thom Johnson, and Zundra Dilworth. Honorary pallbearers are Andrew Fox Jr., Chris King, the AHS Class of 1988, and the Tupelo High School Marching Band. Visitation will be Friday, January 11, from 5-8PM, as well as Saturday from 12-12:50 at the funeral home. In lieu of flowers, donations may be sent to the Tupelo High School Band Boosters, Attn: Rick Murphy, 4125 Golden Wave Drive, Tupelo, MS 38801 Please feel free to share condolences and memories with his family at eepicklefuneralhome.com

The family of Mike H. Tubb created this Life Tributes page to make it easy to share your memories.

Send flowers to the Tubb family.