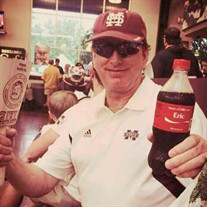 Amory – Michael Lloyd Nerren, 63, passed away on December 28, 2020 at Oak Tree Manor, Amory, MS. Born on January 17, 1957, in Amory, MS, he was a son of the late Floyd Nerren and Lorene Hall Seymour. Michael grew up in Amory and graduated with the Amory High school class of 1975. He then went on to further his education at ICC where he played tennis and graduated from ICC in 1977. He was a loyal employee for both the Frisco Railroad and BNSF for over 38 years. He was stationed in Amory, Memphis and in Fort Worth, TX. He enjoyed his job and loved his co-workers as they were like family to him. Michael appreciated how they were there for him at all times, good and bad. During his lifetime, he was blessed by God with four children. He loved the Lord and was a member of First Baptist Church in Amory. Michael truly loved his children, was a proud father and he often bragged on their accomplishments. He liked storytelling and just spending time with them. He looked forward and loved spending time with his daughter when she visited with him. Michael was also real close to his sister, Donna, who brought him lots of his favorite foods and goodies and his brother, Sam, who helped him walk again after experiencing some medical problems. Another close friend of his was Keith Brown who helped raise money for his friend in time of need. Michael was a diehard MSU fan who was loyal to the bulldogs. He lived and breathed Mississippi State and enjoyed watching any sport played by his team. He frequented the ballgames with family and friends. Michael also liked to shop and look for Mississippi State treasures to buy. A few of his favorite items in life were Bill’s Hamburgers and a glass bottle of Coca Cola. A fine man, Michael brought so much joy to his family and friends. All the memories made through the years will be cherished for many years to come. Although he will be missed dearly, his family knows that he is at peace and healed with his Lord and Savior. Left behind to cherish his memories are his daughters, Sara Nerren Brown (Robert), Aberdeen, Crystal Nerren, Frisco, TX; sons, Les Nerren (Jill), Sulligent, Eric Nerren (Caitlin), Fort Worth, TX; grandchildren, Liliana Nerren; Mary, Grace and Jeremy Nerren; brother, Sam Nerren (Kathy), Amory; sister, Donna Horton (Keith), Amory; special friend, Keith Brown; several nieces and nephews. He was preceded in death by his parents, Floyd Nerren and Lorene Hall Seymour. His funeral service will be held on Wednesday, December 30, 2020 at 1:00 pm at E. E. Pickle Funeral Home in Amory with Bro. Jimmy Mc Fatter officiating. Entombment will follow at Lee Memorial with pallbearers being Josh Finney, Justin Harris, Robert Brown, Miles Nerren and Mark Lantrip. Honorary Pallbearers will be Keith Brown, Keith Horton, and the fellow co-workers with BNSF. Visitation for family and friends will be on Wednesday, December 30, 2020 from 12:00 pm until the service hour at the funeral home in Amory. The family would like to thank the caring staff at Oak Tree Manor. Memories and condolences may be shared with his family at EEPickleFuneralHome.com.

The family of Michael L. Nerren created this Life Tributes page to make it easy to share your memories.

Send flowers to the Nerren family.