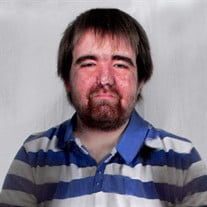 Michael Shane Lauderdale, 32, passed away on June 15, 2019, at North Mississippi Medical Center Hospice Center, Tupelo, MS. He was born on August 29, 1986, in Amory, MS, he was a son of Mike Lauderdale and the late Mary McAfee Lauderdale. Michael graduated from Amory High School with the class of 2004. A big hearted young man, he was very loving and caring of others. He was blessed during his lifetime to have many family members help him as well as friends. He was always concerned about other’s feelings and if they were doing ok. His family and friends would tell you he had a precious heart and relationships made the most to him. Michael was talented at playing video games and could beat just about anyone who played against him. Michael loved to watch DVDs, t.v., and listen to country music. Coin collecting was one his favorite hobbies and he was a proud Honorary Member of the Monroe County Sheriff’s Department. His friends were very important to him and he was diligent in keeping in touch daily with them through the phone. His family and friends will miss him dearly but they are at peace as they know he is no longer struggling and is reunited with his mother. The memories of him will be cherished forever. Michael is survived by his father, Mike Lauderdale, Amory; sisters, Haley Woods (Jerren), Amory, Cortney Parrent (Austin), Navaree, FL; brothers, Daniel Dykes (Abbi), Nettleton, Austin Lauderdale, Wren; grandmother, Pat McAfee; nieces and nephews, Bexley Woods, Easton Parrent, and Tripp Dykes; and many special friends. He was preceded in death by his mother, Mary McAfee Lauderdale. A Memorial Service will be held on Wednesday, June 19, 2019 at 1:00 pm at E. E. Pickle Funeral Home with Bro. Dennis Smithey officiating. Visitation for family and friends will be 11:30 - 1:00 PM, Wednesday, June 19, 2019 at the funeral home in Amory. Please share your memories and condolences with his family at eepicklefuneralhome.com

Michael Shane Lauderdale, 32, passed away on June 15, 2019, at North Mississippi Medical Center Hospice Center, Tupelo, MS. He was born on August 29, 1986, in Amory, MS, he was a son of Mike Lauderdale and the late Mary McAfee Lauderdale.... View Obituary & Service Information

The family of Michael Shane Lauderdale created this Life Tributes page to make it easy to share your memories.

Send flowers to the Lauderdale family.